Premium components and strict testing procedure
The newly-unveiled high clock rate Giant II DDR3-2000 and DDR3-1600 8GB &12GB memory kits use advanced process 256Mb x 8 chips, which are screened and tested with the advanced test fixture and programs under diversified parameters of voltage and time sequences. Stricter than other brands’ screening standards, the particles are rigorously tested under high temperature and high pressure environment for 72 hours without intermission to ensure best overclocking performance and stability. Not only does Apacer adopt the quality chips that have passed the strict tests, but it also equipped the kits with large heatspreader with exclusive air-fall vents for quick heat dissipation. These effective thermal designs help deliver optimum overclocking performances while maintaining cool temperatures.

High capacity for maximum system performance
The Apacer’s Giant II series is available with 8GB dual channel Kit (4GBx2) and 12GB triple channel Kit (4GBx3), offering DDR3-2000 and DDR3-1600 clock rate for users to choose from. Thanks to its incredible capacity, these four kits run well in most intense games and demanding applications and allow advanced PC enthusiasts and gamers to optimize the RAMDISK and achieve the best possible system efficiency. Users can open multiple windows at the same time while enjoying a stable performance in a 64-bit version of Window 7.

Fully compatible with Intel and AMD platforms
Among the pluses of Giant II series is the full compliance with Intel Core series and AMD AM3 platform, including the Intel XMP support. Moreover, Giant II enables a robust overclocking solution for any platform to realize benefits such as huge capacity, high performances and high clock rate. 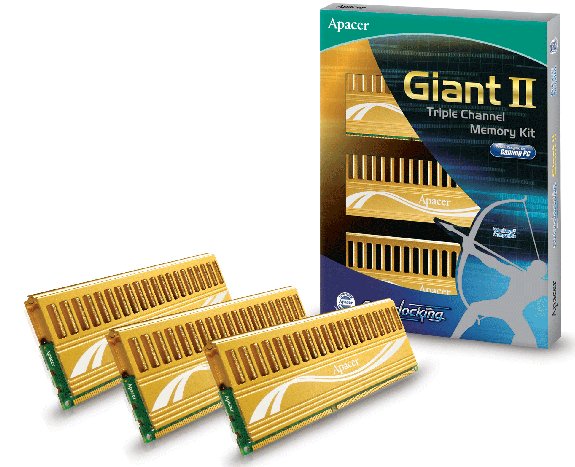