Posted on Wednesday, Dec 08 2010 @ 19:04 CET by Thomas De Maesschalck
RunCore announced it has developed a new SATA 6Gbps 3.5" SSD with a storage capacity of 1TB. The disk uses a SandForce controller and can achieve data rates of over 500MB/s. Pricing is unknown.

For several years of development, the commercial level of SSD has begun to take shape in the market. More and more people take SSD into consideration for their laptop computers, but the capacity of 2.5-inch SSD cannot meet their daily needs. RunCore has recently released a 3.5-inch SSD with its maximum capacity of 1TB. This SSD is not only with a large capacity, but also supports SATA III 6 GB with a fancy performance of more than 500MB/s.

In the current SSD market, the maximum physical size of SSD is 2.5 inch due to limited number of Flash memory chips, which also limite SSD's maximum capacity. Therefore, some SSD users had to prepare an extra large capacity HDD in order to store large amount of files. The new product of RunCore is a good solution to such occasion. The performance of this 3.5 inch SSD almost reached the limit of SATA III 6 GB, plus specially designed to increase the function of different mode selection, which is, switching the button can select correspondingly high-performance mode or data backup mode.

If you open the casing of the SSD, you could see that the "content" of the SSD is quite "substantial". Large size of PCB, both sides covered with flash chips, and symmetrically divided into two groups. Each flash group has a Sandforce controller, which is equivalent of two Sandforce 1200 single drive. The read and write performance of each drive can be respectively reach 285MB and 275MB. These two groups of flash chips are connected to co-work by a RAID chip which is located in between. 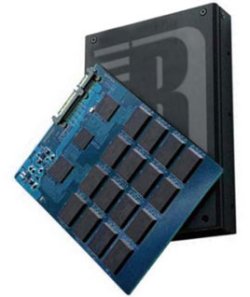