Over the past few years, most of the cooling systems in computers tend to have different parts to form a liquid cooling compartment within the system. However Cooler Master designed and developed a new liquid cooling technology which allows all the components of the liquid cooling system to form into one specific cooling unit. Furthermore, this new system comes fully assembled and allows easy installation for your high temperature CPU. All you need to do is mount the water block on the CPU, attach the radiator and fan to the inside of your chassis. It is that simple. 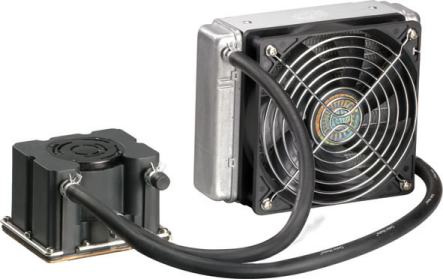 Cooler Master is the first in the world to patent (pending approval) an exclusive design of a 2-in-1 module which consists of a pump and a CPU water block to eliminates the need for a 5½” bay to mount the pump or tank. This new technology comes completely fully assembled which includes the CPU water block, radiator, fan, thermal paste, cooling fluid and tubing. That is everything you need to bring those high performance CPU temperatures down, saving your steps and your valuable time. There is no much maintenance required on the cooler, as no refills of cooling fluid is needed for two years. Besides, the pipe is connected to the block with a vacuum process that ensures absolutely no leaks

Cooler Master plans for this new breakthrough in product design of the liquid cooling system is to apply this to the OEM market. The benefits of this Liquid cooling system is to save your space in server chassis as there is only a need for one Liquid cooling system for several CPUs in the server chassis rather than using several separate coolers. We believe that this new technology is able to benefit the OEM market as it is so much convenient to install this new technology as compared to the old method where there are so many steps to install. Furthermore, Cooler Master believes that not only will their customers experience superior cooling performance in true silence, but also a simple and care free installation process with Cooler Master’s new advanced cooling technology.