Posted on Friday, Apr 01 2011 @ 21:25 CEST by Thomas De Maesschalck
VR Zone obtained exclusive pictures of MSI's upcoming Radeon HD 6790 graphics card. The specifications are unknown, but it's expected to be the same as the reference model; 800 shaders, 40 texture units, 32 ROPs, 256-bit memory bus, 840MHz core and 4.2GHz memory. The card is expected to be officially introduced on April 5th.

We presume MSI will offer a couple of different versions and the pictures we have are of the most basic model which we believe will be called the R6790-2PM2D1GD5 going by MSI's standard naming scheme. We'd also expect to see an OC version at some stage and maybe even a Cyclone or Twin Frozr II version. MSI has gone for a high-end rear I/O layout with a pair of DVI ports, a pair of mini DisplayPorts and an HDMI port. The cooler features three heatpipes and is of the same design as MSI uses on a couple of its Radeon HD 6850 cards. 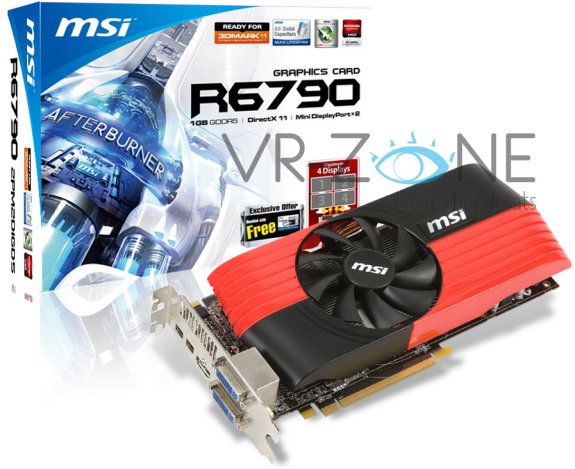