SpaceX Falcon Heavy to be most powerful private rocket ever

Posted on Wednesday, Apr 06 2011 @ 20:44 CEST by Thomas De Maesschalck
SpaceX announced plans to build Falcon Heavy, a new rocket that will be capable of launching larger payloads into space than any other rocket operating today. The Falcon Heavy will be capable of launching a payload of 53 tons into low-earth orbit, almost double as much as the Space Shuttle's 24.4 ton, but it's still dwarfed by the Saturn V's capacity of 119 tons.

The first test flight of the heavy-lift rocket is expected as soon as 2013. Depending on the payload, a launch is expected to cost between $80 million and $125 million. Interestingly, the rocket is designed to meet all of the published human standards and could potentially be used to return to the Moon or go to Mars. More details at Space.com.

"It certainly opens up a wide range of possibilities, such as returning to the moon and conceivably going to Mars," Musk said. Traveling that far requires more lift than most rockets flying today, including NASA's space shuttle. But the Falcon Heavy, which is designed to generate 3.8 million pounds (1,700 metric tons) of thrust, would be able to do the job, Musk said.

The Falcon Heavy booster is designed to have more lifting capability than any other rocket in service today, and about half the capability of the most powerful rocket ever built, NASA's towering Saturn 5 booster, which sent the Apollo astronauts to the moon in the late 1960s and early 1970s. The Falcon Heavy may not be able to carry everything needed for a mission to the moon in a single go, but it could potentially launch various components separately. For example, the astronauts and moon lander could be launched in one trip, with another liftoff following to deliver the vehicle that would ferry the crew back home, Musk said. 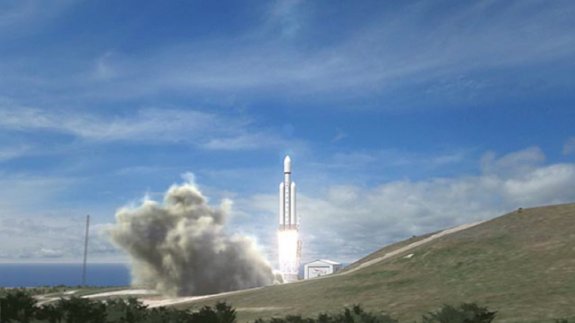