Posted on Sunday, Apr 10 2011 @ 21:27 CEST by Thomas De Maesschalck
VR Zone published pictures of MSI's upcoming GeForce GT 520. This budget card is expected to be released in the near future, it offers a GF119 GPU with 1GB GDDR3 memory and DVI, HDMI and VGA outputs.

The GT 520 GPU is also known as the GF119 and as with just about every other entry level card for the past decade we're looking at a 64-bit memory interface. The GPU is reported to be running at 810MHz with the shaders at 1610MHz and memory at 1794MHz (effectively), although this is based on leaks from zol.com.cn and might not be the actual clock speeds of all cards. We're also looking at 8 ROPs and 48 shaders, again typical for an entry level Nvidia card. As to when the actual launch is, well, we'd expect it to be in the next week or two, but we'll just have to wait and see. 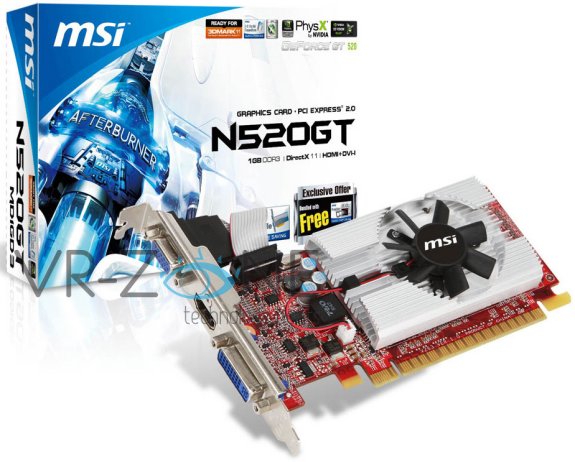