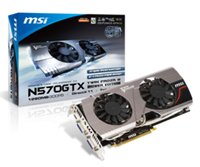 MSI has also taken different user preferences into consideration and includes an exclusive P/S Switch function for controlling the speed of the dual fans. Under performance mode the maximum load temperatures are kept in check, while silent mode emphasizes low noise output. Regardless if games are being played or movies are being watched, the perfect balance of noise control and outstanding cooling performance are guaranteed.

Power Edition Architecture Boosts Overclocking Potential by 22%
The Power Edition architecture returns for the N570GTX Twin Frozr III Power Edition graphics card. The 6+1 phase power supply design offers 40% more power than the reference board to ensure stability, even when overclocked. Support for Afterburner's Triple Overvoltage function means GPU/Memory/PLL2 voltages can be adjusted to fully unleash the graphics card's overclocking potential and boost performance by up to 22%!!

Handpicked Components for the Best Quality
With their military class components representing the best quality and stability, MSI Military Class graphics cards have won the support and trust of enthusiasts. MSI has now introduced Military Class II components for even better performance, including Tantalum Core solid state capacitors with up to 8 times the lifetime, SFC high-performance choke for 30% more power and solid capacitors for 10 years of service life. MSI Military Class components provide graphics cards with the best possible quality and stability.