Posted on Wednesday, Apr 20 2011 @ 20:47 CEST by Thomas De Maesschalck
TechPowerUp reports Intel is working on two lines of enthusiast class Sandy Bridge-E series processors, you can check it out over here.

In Q4 2011, Intel will unveil its new Sandy Bridge-E (enthusiast) platform, consisting of new multi-core processors in the 2011-pin LGA package, and Intel X79 Express chipset. A roadmap slide leaked to the Chinese media reveals an interesting way in which Intel will approach the platform to monetize it best. To begin with, it appears like Sandy Bridge-E will keep up with the trend set by LGA1155 processors where only certain models can be overclocked, while others are greatly limited. Among those that can be overclocked (or "unlocked", as Intel puts it,) there will be two classes. 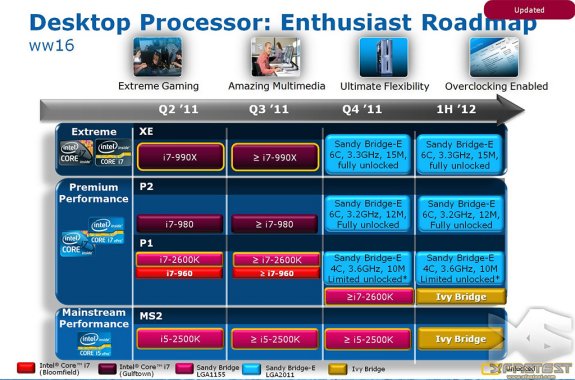