Posted on Tuesday, Apr 26 2011 @ 23:03 CEST by Thomas De Maesschalck
ASRock shows off the AM3b, claiming it's the first motherboard maker to ready motherboard that use real AM3+ sockets. ASRock claims the AM3b offers several enhancement, full details can be found at TPU.

ASRock launched a new marketing campaign for its AMD platform motherboards, claiming to be the first manufacturer to be out with motherboards that use real AM3+ sockets. AM3+ is the FCPGA socket that has been designed for upcoming AMD FX series "Zambezi" processors based on the "Bulldozer" architecture. As a part of its campaign, ASRock highlighted the benefits of opting for its AM3+ motherboards. In the process, it ended up disclosing quite some technical information about AM3+, and why AMD designed it in the first place, when apparently AM3 can run Zambezi with a BIOS update.

To begin with, ASRock started with the socket itself, showing that AM3+ sockets can be identified by "AM3b" written on the socket, and have wider pin-holes (0.51 mm vs. 0.45 mm of AM3). It is possible that future (retail?) versions of the CPU, if not the engineering samples doing rounds, could use packages with thicker pins that are incompatible with AM3. The thicker pins add durability, and are designed for a different set of electrical specifications.. 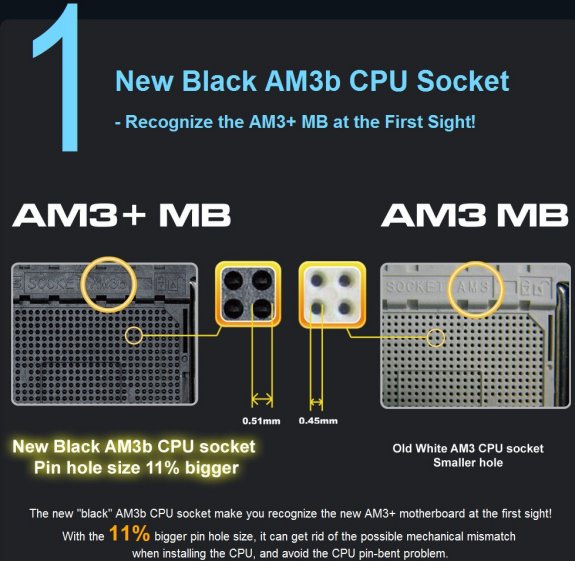