Internet on the go with Nokia's 770 Internet Tablet

Posted on Thursday, May 26 2005 @ 18:09 CEST by Thomas De Maesschalck
Nokia introduced its first internet tablet at LinuxWorld Summit in New York. The Nokia 770 Internet Tablet is a dedicated device with a Linux OS, optimized for internet browsing and communication on the go in a pocketsize format.

The Nokia 770 features a large 800x480 widescreen display with zoom and on-screen keyboard. Nokia says it is the ideal device to surf the internet over a Wi-Fi network. Besides Wi-Fi the Nokia 770 also supports Bluetooth to connect to the internet via a mobile phone.

Some of the highlighted applications for the Nokia 770 Internet Tablet are RSS news readers, image viewers, media players for selected types of media and also Internet radio.

Nokia's 770 runs on the Nokia Internet Tablet 2500 software which is based on Linux. The company said the maemo development platform will provide Open Source developers and innovation houses with the tools and opportunities to collaborate with Nokia on future devices and OS releases in the Internet Tablet category. 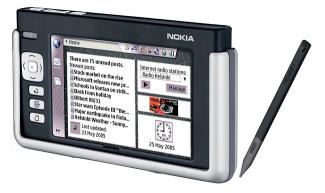 "Linux is a logical choice for the Nokia 770 Internet Tablet as Linux and the Open Source development platform provide us with fast and efficient solutions to build products for this new, Nokia product category. This is the first step in creating an Open Source product for broadband and Internet services. We will be launching regularly updates of the software. The next software release planned for the first half of next year will support more presence based functionalities such as VoIP and Instant Messaging", says Janne Jormalainen, Nokia's Vice President of Convergence Products, Multimedia.

The device will start shipping in the third quarter of 2005, pricing isn't available yet.