Posted on Thursday, May 26 2005 @ 19:49 CEST by Thomas De Maesschalck
Intel introduced two new platforms today, one for home users and one for businesses. The desktop platform features the new Pentium D processors combined with the i945 chipset. The Pentium D 820, 830 and 840 processors have a clockspeed of respectively 2.8GHz, 3.0GHz and 3.2GHz.

There are two different versions of the 945 chipset, you have the 945G with the integrated Intel GMA 950 graphics solution and the 945P without integrated graphics. 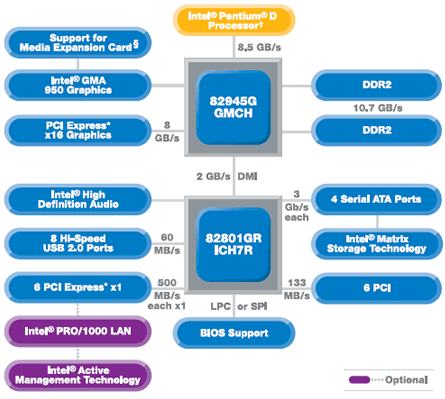 
The Intel GMA 950 supports 1080i and offers support for an optional Media Expansion Card to watch TV on your home PC. A review of the 945 chipset can be found at Bytesector.

The 945 chipset is comparable to the 955X chipset but lacks some features of its big brother. It only supports 4GB of memory, the 955X supports 8GB, and also lacks ECC and some optimization techniques. Another major difference between both chipsets is that the 945 doesn't support dual-core processors with Hyper-Threading, like the Intel Pentium 4 Extreme Edition 840.