VIA today launched the VIA C7 processor, a new competitor to Intel's popular mobile Pentium M processor. The C7 is based on the Esther core, it VIA claims it is the world's smallest, lowest power and most secure native x86 processor. The VIA C7 is produced on a 90nm SOI process from IBM and the 2.0GHz version uses only 20W at peak levels while idle power consumption is as low as 0.1W. The 1.5GHz has a thermal design power of 12W and the 1.8GHz C7 uses a maximum of 15W.

The VIA C7 processor also signals an era of practical pervasive security due to the industry-leading security features of the VIA PadLock Hardware Security Suite, a family of advanced security technologies providing on-die hardware acceleration for key cryptographic operations.

In addition to the world's best random number generator (RNG) and AES Encryption Engine in the previous processor generation, the VIA C7 processor adds SHA-1 and SHA-256 hashing for secure message digests, and a hardware based Montgomery Multiplier supporting key sizes up to 32K in length to accelerate public key cryptography, such as RSA.

The VIA C7 also provides execute protection (NX), providing protection from malicious software such as worms and viruses, and is used in Microsoft Windows XP with SP2. Integrating security directly onto the processor die ensures speeds and efficiency many times that available in software, yet with negligible impact on processor performance.

The C7 chip will go into mass production by the end of this quarter. Benchmark data isn't available yet, besides the chart VIA provided comparing its C7 processors to Intel's Pentium M. 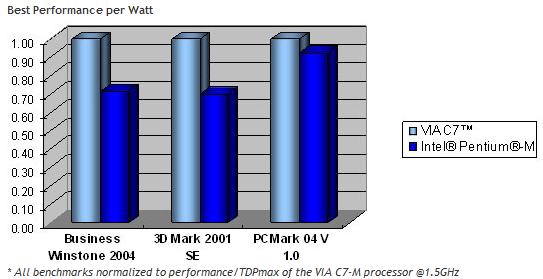 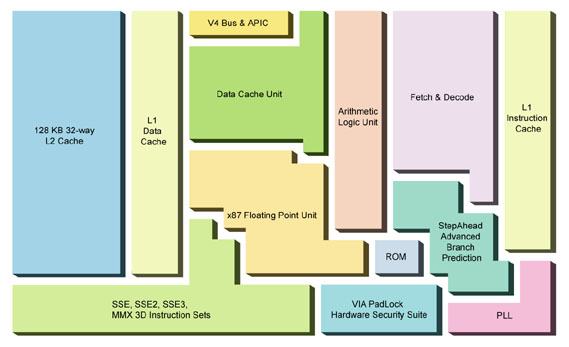