Posted on Monday, May 30 2005 @ 23:58 CEST by Thomas De Maesschalck
New measurements suggest the Andromeda galaxy, the nearest galaxy to our own Milky Way, is three times bigger than astronomers had thought. They discovered a thin sprinkling of stars once thought to be a halo is in fact part of the spiral galaxy's main disk. 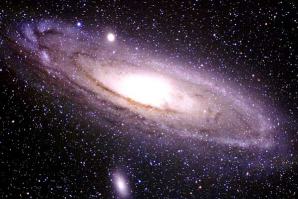 An old picture of the Andromeda galaxy


A group of scientists studied the motions of about 3,000 stars and discovered they are not a halo but a part of the galaxy's disk. They found out that that the stars are sited in the plane of the Andromeda disk itself and move at a velocity which suggests they are in orbit around the center of the Andromeda galaxy. More info at Reuters