Posted on Thursday, September 15 2011 @ 22:48 CEST by Thomas De Maesschalck
The Tech Report saw a bunch of ultra-slim ultrabook systems at the IDF in San Francisco, you can view the photos over here.

IDF — Mooly Eden laid out the basic parameters for the new wave of laptops that Intel has been pushing during his IDF keynote earlier this morning. In a nutshell, Intel is encouraging PC makers to emulate Apple's MacBook Air systems, although (of course) they don't use those exact words. The systems are intended to be very thin and light, with decent performance courtesy of Sandy Bridge processors, solid battery life (although that one seems negotiable so long as the thinness remains), and prices below $1000. The first Ultrabooks should be arriving in the next few months, though obviously the Sandy Bridge-based MacBook Air is out now, as is Samsung's Series 9, which we've reviewed. In order to achieve their thin profiles, Ultrabooks are likely to include SSDs (almost exclusively) and non-user-replaceable batteries... 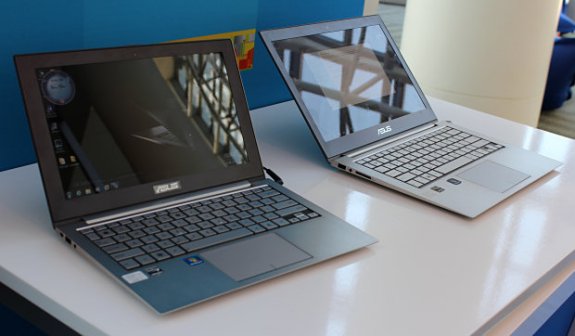