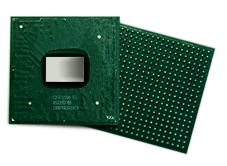 The VIA C7-M Mobile processor has ten original design manufacturers lined up, including Mitac, FIC, Arima, Quanta and Twinhead. VIA is producing both ultra-low voltage and ordinary versions of its C7-M processor at speeds up to 2GHz. The processor supports SSE2, SSE3 and DDR2.

The C7M consumes as little as 100mW (0.1W) idle power and has a maximum thermal design power (TDP) of around 20 watts at 2.0GHz. The current C7-M processor only has 128KB L2 cache but VIA expects to increase the cache of its processor in the future, according to The Inquirer.

VIA also claimed it will launch dual-core, quad-core and 64-bit versions of this processor. The C7-M is produced by IBM on a 90nm process and has a FSB of 400MHz and 533MHz. In future VIA also plans to launch C7-M processors with a 800MHz FSB.