After releasing the world’s first heatpipe heatsink in 2000, Cooler Master announces that it will begin to phase in Vertical Vapor Chamber technology into its upcoming retail CPU heatsinks; a technology initially developed by Cooler Master’s OEM and industrial cooling division.

Vertical Vapor Chambers feature less than half the air resistance by reducing airflow vortexes and noise generated by air streaming through a heatsink. At the same time vertical vapor chambers exhibit 3 times the fin contact area, enabling faster and more efficient transfer of heat from the vapor chambers to the fins, and overall more efficient use of the available fin surface area.

As a result, Vertical Vapor Chambers allow Cooler Master to develop cooling solutions with greatly reduced noise footprints or increased cooling performance in excess of 200W at the same or lower noise level as without vertical vapor chambers.

The high-end tower heatsink Cooler Master TPC-812, the first product based on this latest technology and Cooler Masters leading product development process will be officially released to the market in a few weeks during CeBIT 2012. 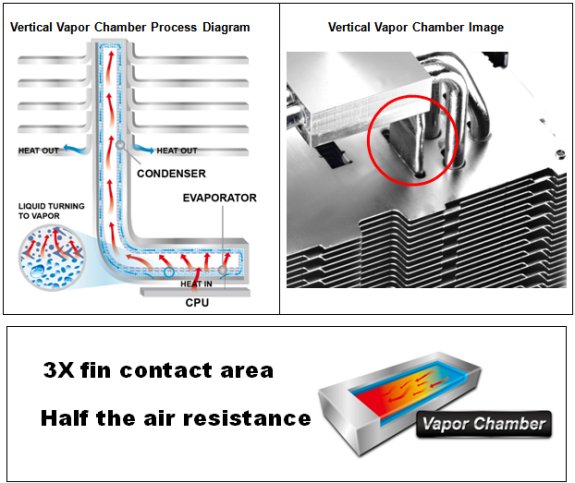