Posted on Monday, Nov 26 2012 @ 14:54 CET by Thomas De Maesschalck
Mojang announced this weekend that the Raspberry Pi is getting a free port of Minecraft. The Minecraft: Pi Edition is based on the code of Minecraft: Pocket Edition, a cut-down version of the game that was originally made for Android and iOS devices. Interestingly, the Raspberry Pi port will support several programming languages, enabling players to modify the game world at will.

Soon you’ll be able to play and program with Minecraft on one of the snazzy little devices. Aron and Daniel have dedicated time to porting a version of Minecraft: Pocket Edition that comes with a revised feature set and support for multiple programming languages. We’re calling it Minecraft: Pi Edition, and it will be completely free to download.

The possibilities are massive. You could organise the cheapest LAN party of all time, or use the Pi to learn the fundamentals of programming on a miniscule budget. It’s like hacking your way into Minecraft and modifying the game world with code, a bit like being Notch, Jeb, or Nathan, but arguably more fun and less stressful. 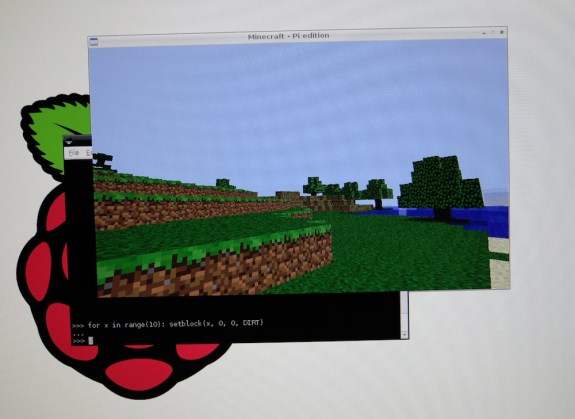 In related news, Engadget reports that the Raspberry Pi will soon also get a camera add-on. Expected to hit the market in 2013 for $25, the camera offers a 5 megapixel resolution and support for shooting 1080p video at 30fps.