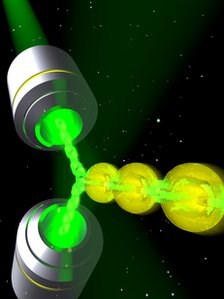 Researchers at the University of St Andrews in Scotland managed to create a real-life tractor beam, which uses light to move microscopic particles. The research is hoped to have applications in the medical world, such as for sorting cells. Full details at DailyTech.

The authors use a two-laser setup to manipulate a series of spherical nanoparticles of various sizes. A variety of kinds of motion range from attraction to 2D motion to 1D sorting are achieved, using different beam techniques. Dr. Cizmar says that the ability to pull objects against the photon stream may seem particularly odd to the layman, remarking to BBC News, "It's surprising. Only when we looked in detail at the process did we see the reversal. It's quite a narrow field it occurs at."

The new technique bears advantages over other kinds of "tractoring" in the sense that it could work both in liquids and in vacuum. It also is highly selective, perhaps more so than the other forms of tractoring. Dr. Cizmar warns that tractoring large objects would be undesirable, even if the approach could somehow be scaled up. The beams transfer a small amount of energy to the object, which is in turn converted into heat. On a microscopic scale, the amount transferred is very small, but for a person -- let alone a starship -- the heating would likely be very destructive.