Posted on Monday, Jan 28 2013 @ 22:13 CET by Thomas De Maesschalck
Aerocool introduces two new cases in its Templarius family; the Ferrum and the Telum. Both cases are currently shipping in Europe, the Telum (Black) costs 50.50EUR, the Telum (White) goes for 54.55EUR and the Ferrum is priced at 45.50EUR.

Taiwan based manufacturer Aerocool is hereby announcing the availability of the two new PC chassis Ferrum and Telum. Both chassis belong to the recently formed Templarius family . Templarius aims especially at gamers, who are looking for excellent gaming peripherals coming in one unique look. This new brand will feature products such as mice, keyboards, headsets and power supply units alongside PC chassis which will all come in a unified design. Templarius brand logo is designed in the style of medieval knights of Templar. Interested users are invited to join the Facebook fan page of Templarius Gaming, to be part of the “Knight’s Brotherhood!” community. New additions of the Templarius brand are the PC chassis Ferrum and Telum.

Ferrum’s exterior design catches the attention easily thanks to the perfectly matched black and white colors in combination with the Templarius logo and the underlining black stripes. Chassis is made of 0,5 mm thick SGCC steel to provide a solid and firm armor. On the inside, enough space for high-end components such as latest ATX or µATX mainboards and VGA card with a total length of up to 400 mm is provided. Consequently gamers have enough space to assemble high-end systems using flagship VGA cards such as the GeForce GTX 690 or Radeon HD 7990. To further increase the usability, the mainboard tray is equipped with openings for easy access to the backplate of CPU coolers as well as special cable management holes.

To assure optimum airflow, both the top and front panel are equipped with mesh grid, allowing users to guide the airflow individually according to their preference. Furthermore up to 10 case fans can be mounted inside the Ferrum PC chassis, where one silent 120 mm axial fan is pre-mounted in the front panel. 5,25 inch bays are equipped with the tool-free Multi-X mounting mechanism, which allows easy mounting of drives, fans, 3,5 or 2,5 inch HDD/SSD or other accessories. In addition Ferrum PC chassis is equipped with pre-drilled watercooling holes as well as a dust filter to protect the PSU. Last but not least is the i/O-Panel, wich is located in the top of the Chassis, that provides one USB 3.0 and one USB 2.0 port alongside with audio connectors.

Second addition to Templarius family is the Telum PC chassis, which is available in two versions. Users can choose from a completely black or a white version with some black elements. Aerocool used 0,5 mm thick SPCC steel for the chassis in combination with a black acrylic window inside the side panel. Both top and front panel are equipped with mesh grid to allow optimizations of airflow. Telum comes with two pre-mounted 120 mm axial fans, additionally up to 8 further case fans can be mounted. Furthermore a fan controller is located in the top panel, which allows users to operate the built-in fans at full speed using 12 volts or low-speed using 5 volts, or even completely shut down the fans.

Similar to Ferrum, a user-friendly mainboard tray has been utilized, allowing easy access to the backplate of CPU coolers and additional holes for better cable management. Features such as durst filter for the power supply unit, pre-drilled watercooling holes and the tool-free Multi-X mounting mechanism have been integrated in the Telum PC chassis as well. To improve connectivity, one USB 3.0 port, two USB 2.0 ports and audio connectors as well as power and HDD LEDs are located in the top panel. 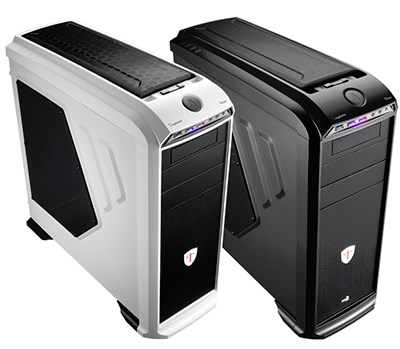 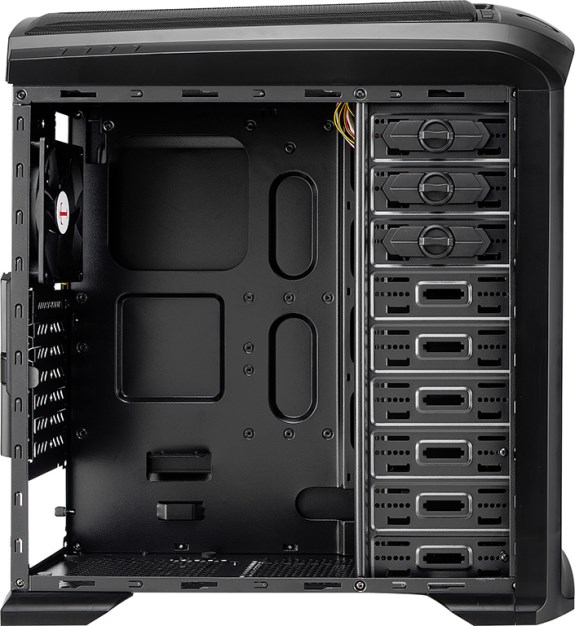 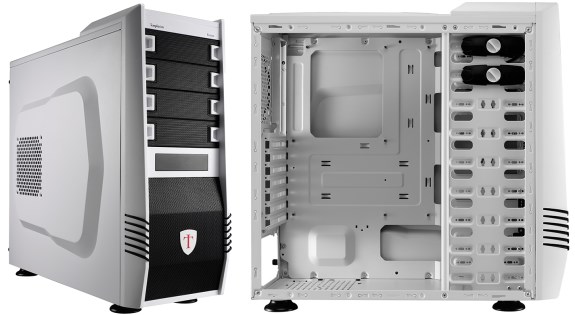