Posted on Tuesday, Feb 12 2013 @ 11:49 CET by Thomas De Maesschalck
Noctua introduces the NF-S12A, a new line of 120mm fans that features a further refined blade design with Anti-Stall Knobs that works in tandem with the new AAO (Advanced Acoustic Optimisation) frame to improve the airflow/noise efficiency by up to 8 percent over its predecessor.

Noctua today presented the new, third generation of its signature S12 series quiet case fans, which have received more than 250 awards and recommendations from the international press. Featuring a further refined blade design with Anti-Stall Knobs that works in tandem with the new AAO (Advanced Acoustic Optimisation) frame, the NF-S12A improves the airflow/noise efficiency of its renowned predecessor by up to 8%.

"Introduced in 2006, the original NF-S12 became a cornerstone of our reputation as one of the leading manufacturers of premium quality quiet fans. The second generation NF-S12B, introduced in 2009, continued this tradition with an even better airflow to noise ratio, making it one of our most popular models of all time", says Mag. Roland Mossig, Noctua CEO. "We've been working on the next generation for about three years and now we're thrilled to be able to present a worthy successor with the new NF-S12A: The new Anti-Stall Knobs and our AAO type frame allowed us to squeeze out another 8% in airflow to noise efficiency!"

The NF-S12A's novel Anti-Stall Knobs reduce flow separation phenomena in medium to high impedance situations and thereby increase the fan's stall margin. This means that the NF-S12A is even more versatile than its renowned predecessor and can achieve better performance on heatsinks and radiators. Noctua's AAO (Advanced Acoustic Optimisation) frames feature integrated anti-vibration pads as well as Noctua's proprietary Stepped Inlet Design and Inner Surface Microstructures, both of which further refine the fan's performance/noise efficiency.

Three models will be available upon launch: While the NF-S12A FLX version provides 1200/900/700rpm speed settings via the supplied Low-Noise Adaptors in order to give you full flexibility in fine-tuning the fan for maximum ventilation performance or near-silent operation, the NF-S12A ULN version provides super-slow 800/600rpm speed settings for ultra-low-noise applications and highly noise-sensitive users. The NF-S12A PWM sports Noctua's custom designed NE-FD1 IC for fully automatic speed control via 4-pin fan headers and comes with a Low-Noise-Adaptor to reduce the maximum speed during PWM control from 1200 to 900rpm.

All three models employ the further optimised second generation of Noctua's renowned, time-tested SSO bearing and use CNC milled brass bearing shells in order to guarantee the highest possible degree of manufacturing precision, minimum tolerance and excellent long-term stability. Like all Noctua fans, the NF-S12A models have an MTBF rating of more than 150.000 hours and come with a full 6 years manufacturer's warranty. 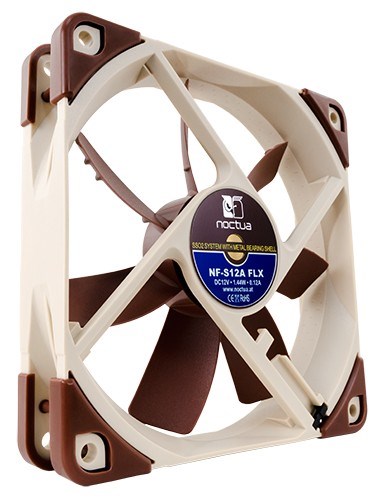