Valley on the other hand is a new multi-platform benchmark that will feature sixty-four square kilometers of highly detailed terrain, a user-controlled environment (day/night and weather effects), extreme deep distance of visibility, seamless terrain streaming, cinematic lens flares, interactive fly/walk modes in the open world and benchmarking capabilities similar to the Heaven benchmark.

Worth noting for Unigine Heaven 4.0 and Unigine Valley 1.0 for Linux users is that the engine will require the use of the proprietary AMD / NVIDIA graphics drivers for now. Unigine Corp developers have migrating their OpenGL renderer to now using an OpenGL Core profile rather than OpenGL Compatibility. Overall, their improved GL renderer is closer to being in strict compliance with the latest OpenGL specification, but as Unigine Corp wrote in an email to me, "it seems to be not very compatible with open source drivers." Unigine Corp isn't doing anything to make their wonderful OpenGL tech demos and game engine not work with the open-source Mesa/Gallium3D drivers, but right now these drivers just come up short. As Mesa betters it support for OpenGL 3.x/4.x, Unigine should work again, but for now it's only the proprietary AMD and NVIDIA drivers due to these open-source driver shortcomings. 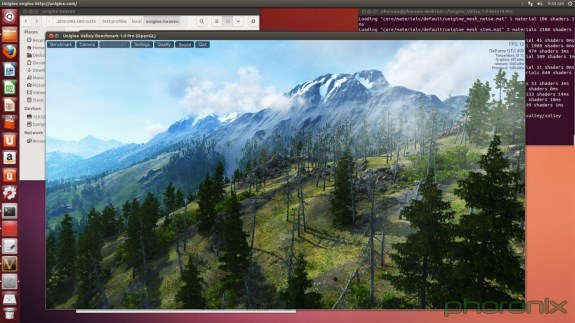 Full details and screenshots can be found at Phoronix.