Is this the NVIDIA GeForce Titan? (Photos)

Posted on Monday, Feb 18 2013 @ 14:23 CET by Thomas De Maesschalck
TPU came across pictures of what is claimed to be NVIDIA's GeForce GTX Titan graphics card. The images reveal a very classy, high-end design similar to the GeFroce GTX 690, with a magnesium alloy cooler shroud, a clear window that provides a look at the aluminium fin array, a GeForce GTX logo that lights up green, and a large lateral blower fan.

The GeForce GTX Titan PCB reveals that NVIDIA isn't using a full-coverage IHS on the GK110 ASIC, rather just a support brace. This allows enthusiasts to apply TIM directly on the chip's die. The GPU is wired to a total of twenty four 2 Gbit GDDR5 memory chips, twelve on each side of the PCB. The card's VRM appears to consist of a 6+2 phase design which uses tantalum capacitors, slimline chokes, and driver-MOSFETs. The PCB features a 4-pin PWM fan power output, and a 2-pin LED logo power output that's software controllable. 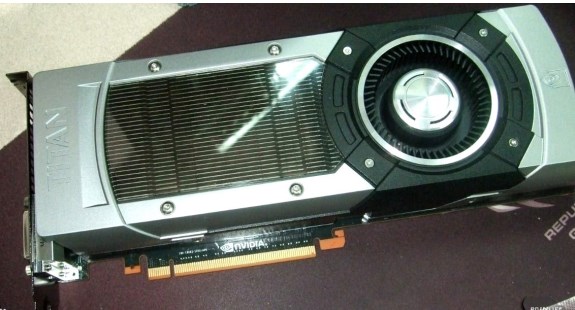