MSI, world renowned in motherboards, graphics cards, and All-in-One PCs, is rolling out an all-new gaming series. The AG2712 is the world's first 27-inch Gaming All-in-One PC. The AG2712 features the Intel Core i7 quad core mobile processor and NVIDIA's top-of-the-line GeForce GTX 670MX discrete graphics card with up to 3GB GDDR5 in graphics memory to maximize your gaming experience. Furthermore, the AG2712 is equipped with an anti-glare Full HD display, for a perfect aim while playing games. With the HDMI-in port and MSI's Instant Display Technolgoy, the AG2712 can also be connected to other game devices such as a PS3, turning the AG2712 in a multi-platform engine for watching Full HD movies or playing the latest games on its large screen. The MSI AG2712 will become available in Europe by the last week of April. For more information, go to http://game.msi.com.

Top end NVIDIA GTX670MX discrete graphics
In terms of full HD resolution, the NVIDIA GeForce GTX 670MX gives the MSI AG2712 the best possible tools to demonstrate the most excellent performance. The GTX 670MX can pack up to 3GB GDDR5 of graphics memory, so games with large numbers of textures are not a problem. The GeForce GTX 670MX also supports Optimus, a real time switching technology that switches between the CPU's graphics card and the GTX 670MX as needed for optimal power efficiency heretofore only found in notebooks.

MSI exclusive Instant Display Technology
When gaming, the AG2712 boasts the speed of a PC, but when you are tired of playing PC games, the AG2712 can be used as an independent monitor and connected to gaming devices, like a PS3. When connected, the PC power source can be completely shut down. When you connect to the PC, MSI's Instant Display technology switches on, so there is no need to activate any functions on the PC, just the monitor, reducing power use. If you want to use the PC, you can quickly switch over using the OSD key when you are connected to a gaming device.

Anti-Glare display for gamers
To give you a more enjoyable experience, MSI was first to incorporate anti-glare display into All-in-One with touch screen, so game players can see foes clearly even when playing under bright light circumstances. The screen helps shield your eyes in most situations, but MSI still recommends that players get adequate rest away from their computers. 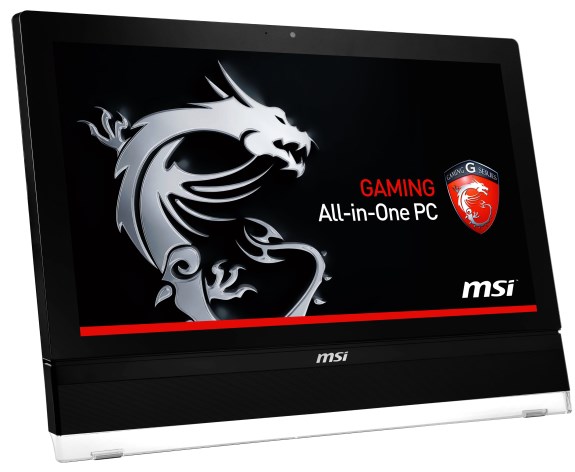