Posted on Thursday, May 23 2013 @ 18:51 CEST by Thomas De Maesschalck
While most other video card vendors launched one or two GeForce GTX 780 models, EVGA went the extra mile and introduced a whopping seven GeForce GTX 780 graphics cards!

The basic model is the reference-based GeForce GTX 780 with stock cooler, it costs 659EUR and features a 863MHZ core, 902MHz Turbo and 3GB GDDR5 memory clocked at 6008MHz. For 10EUR more you can get the GeForce GTX 780 SC, this version offers a 941MHz core, 993MHz Turbo and 6008MHz memory. EVGA says they will also launch a reference clocked model with a custom cooling solution, but the pricing of this model is still unknown.

The other four cards use EVGA's new ACX cooling solution, a dual-slot cooler with two double ball bearing fans. According to EVGA, this cooler has 40 percent more heatsink volume and delivers a 15 percent lower average GPU and memory temperature while also cutting noise levels by 15 percent on average.

Only one of the four cards is immediately available though. The GeForce GTX 780 Superclocked ACX is priced at 689EUR and features a 967MHz core, 1020MHz Turbo and 6008MHz memory. Soon the company will also offer a reference-clocked GTX 780 with ACX cooler, as well as a GeForce GTX 780 FTW ACX and a GeForce GTX 780 Classified ACX but the clockspeeds of the latter two are still unknown.

EVGA also spent time to ensure that even the fan blades were of the highest quality; with a 700% increase in strength, and 25% lower weight when compared to competitors dual fan designs. This makes the fans 20% more efficient by requiring lower power levels. Of course, EVGA is also using double ball bearing fans which offer a 12 year lifespan, this is 4X longer when compared to competitors! 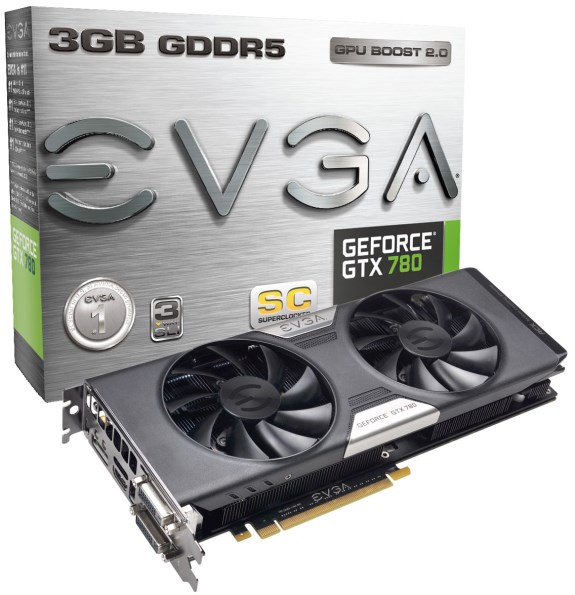