Posted on Tuesday, Jul 16 2013 @ 13:57 CEST by Thomas De Maesschalck
Scythe officially introduces the Grand Kama Cross 2, a new top-flow processor cooler with a nickel-plated copper base, four copper heatpipes and an X-shaped aluminium fin array that's cooed by a 140mm GlideStream PWM fan that delivers up to 97.18CFM at a noise level of up to 30.7dBA. The cooler is compatible with all current Intel and AMD processors, it measures 175.2mm x 140mm x 140mm and weighs 760g. The MSRP is 30.50EUR (excl. VAT).

Japanese cooling expert Scythe announcing the second version of its Top-Flow CPU cooler “Grand Kama Cross”. Scythe Grand Kama Cross 2 is based on the same X-Structure concept as the predecessor, allowing especially efficient cooling of both CPU and surrounding components such as VRMs or RAM, and comes with various improvements. In addition, the X-Structure allows the fairly large CPU cooler to have high compatibility with many motherboards and PC Cases

One of the key goals when designing the Grand Kama Cross 2 was to significantly improve the performance. Hence was achieved by using a large 140 mm axial-fan from the Glide Stream series. Thanks to its larger diameter and PWM-support, sufficient airflow between 37,37 and 97,18 CFM at noise level from 13 to 30,7 dBA is assured. Fan speed can be adjusted individually according to the CPU temperature by the motherboard stepless in the range from 500 to 1.300 RPM. Furthermore, key features of Glide Stream 140 case fan series such as the four anti-vibration rubber pad-inlay and grooved blade design further benefit the Top Flow design of Grand Kama Cross 2 CPU cooler.

In terms of mounting mechanism, second version of Grand Kama Cross moves away from Push-Pin clips to a screw-based mounting mechanism, first introduced with Scythe Ashura CPU cooler. This upgrade assures higher stability as well as more sturdy fit, anticipated by many users and enthusiasts. Thanks to the square copper base-plate, it is possible to turn the heatsink in four different directions, similar to the predecessor for intel sockets. Further advantage of the new „Hyper Precision Mounting System“ (H.P.M.S.) clip system is the support for latest CPU sockets such as LGA1155 and LGA1150 as well as LGA 775, 1156, 1366, and LGA2011. Full support for AMD sockets is provided as well, including the sockets AM2, AM2+, AM3, AM3+, FM1 and FM2! All required mounting clips and screws are supplied with the Scythe Grand Kama Cross 2, including one wrench, one backplate, a multi-lingual manual and quality thermal grease.

Additional target was to keep the overall dimensions and weight of Grand Kama Cross 2 similar to the predecessor, while significantly increasing the performance. With the dimensions of 175,2 x 140 x 140 mm (W x H x D) total height was reduced by approximately 2 mm and weight increased by 10 grams to the total of 760 grams. 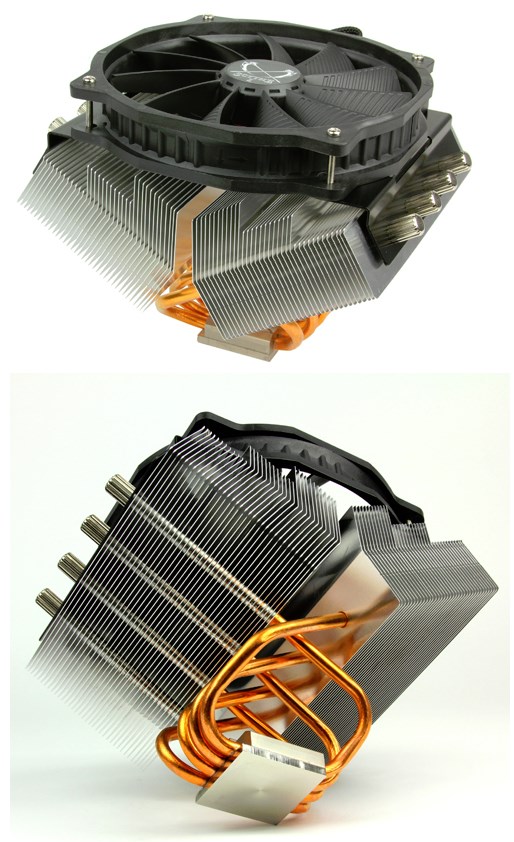