Increasing productivity with a panoramic 21:9 display
The 2560 x 1080 resolution of the ASUS PB298Q is 33% wider than standard Full HD display and, together with its 29-inch diagonal, is equivalent to two non-widescreen, 5:4 aspect ratio, 17-inch monitors placed side by side. The 21:9 aspect ratio gives more room for multiple windows, removing the need for a secondary desktop monitor. The ultra-wide resolution also means users can view more columns in a spreadsheet, with up to 13 more standard-sized columns than a conventional Full HD monitor.

The LED-backlit AH-IPS display gives extremely accurate color reproduction, making the PB298Q ideally suited to both professional and home use. 178-degree wide viewing angles also mean that images don’t wash out when seen from either side, or above and below. Paired with a narrow 0.8mm bezel design, it helps create the illusion of a frameless monitor that delivers edge-to-edge visuals.

Extensive connectivity and exclusive technologies
The PB298Q display has an array of connectivity options for wide compatibility with a range of multimedia devices. Video inputs include DisplayPort, HDMI, and Dual-link DVI ports, while audio can be played through built-in 3W stereo speakers.

With an 80,000,000:1 ASUS Smart Contrast Ratio and a 300cd/m² brightness rating, the ASUS PB298Q display delivers life-like visuals by adjusting backlight luminance to achieve the darkest black and the brightest white shades. The exclusive ASUS MultiFrame software lets users organize multiple desktop windows, arranging them in an orderly fashion where they don’t overlap.

ASUS Splendid™ Video Intelligence Technology also ensures vivid colors in every situation, with its six modes easily activated using a designated hotkey. The PB298Q also comes with QuickFit Virtual Scale with on-screen guidelines for an actual-size preview of images prior to printing.

The PB298Q also features a sturdy stand with adjustable tilt, swivel, and height (up to 150mm), while a pivot joint allows the display to be rotated through 90 degrees for portrait use. 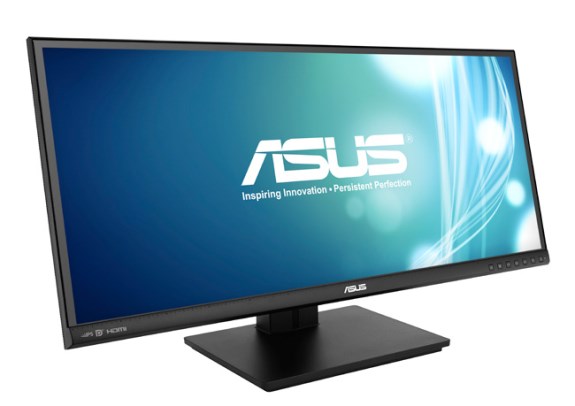