Intel to launch dual-core Xeon in 2005 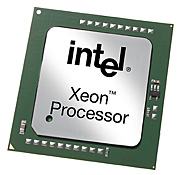 Intel previously stated it would launch the dual-core Paxville in the first quarter of 2006, but these plans changed.