Posted on Tuesday, Aug 20 2013 @ 10:44 CEST by Thomas De Maesschalck
TechPowerUp got its hands on leaked pictures of the MSI GeForce GTX 780 Lightning Edition. Expected to be released on August 28 for around $800, this video card uses MSI's new TriFrozr cooling solution - which offers a large compound dual-fin stack heatsink with seven 8mm diameter heatpipes and three fans: two 100mm ones on the edges and a 70mm one in the center. Each of the three fan's speed can be controlled individually and the card also has a LED-lit badge that doubles as a GPU load indicator.

Under this elaborate cooling solution is a brute of a PCB. Drawing power from a pair of 8-pin PCIe power connectors, the custom-design PCB by MSI features a 20-phase digital PWM voltage regulation, which use a combination of high current chokes, International Rectifier PowIRstage, DirectFET chips, tantalum capacitors, and MSI's GPU Reactor module that cuts out electrical noise. The GPU is wired to 7 GT/s rated Elpida-branded memory chips, and three (that's right, three) GPU BIOS ROMs. One stores a failsafe reference BIOS, another factory-OC air BIOS, and one that primes the GPU for liquid-nitrogen cooling-assisted overclocking. 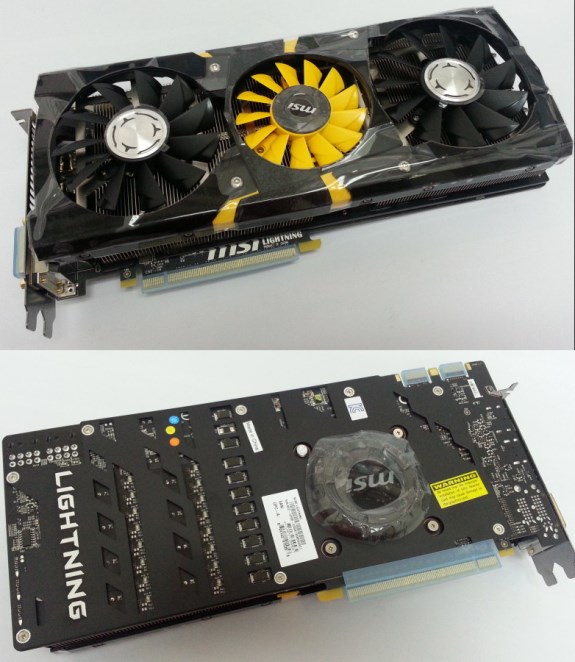