World of Warcraft has 1.5 million users in China 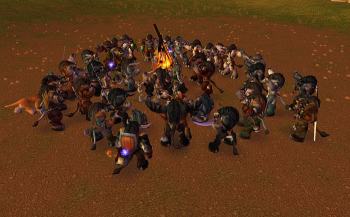 Blizzard proudly announced its massively multiplayer online role-playing game (MMORPG) World of Warcraft has reached 3.5 million global users, with more than 1.5 million users in China. The game was released on June 7, 2005 in China and quickly became a huge success.

"World of Warcraft's success in China has quickly exceeded our expectations, and seeing Chinese gamers respond so enthusiastically to the game has been extremely gratifying," said Mike Morhaime, president and co-founder of Blizzard Entertainment. "We thank the players for embracing World of Warcraft, our partner The9 for helping to make all of this possible, and the Chinese authorities for their support of Blizzard Entertainment."

Blizzard's partner, well-respected MMO operator The9, is leading the operation and management of World of Warcraft in China while upholding its commitment to provide exceptional service as the game's customer base has experienced extraordinary growth. The9's dedicated team in China, composed entirely of Chinese management and staff, has provided localization of game content, synchronization of content updates, and delivery of player feedback to the developers. The9's local team offers 24-hour customer service, with direct game master (GM) support and local call-center representatives dedicated to helping players with questions regarding gameplay and technical issues.

"Chinese gamers across the country have embraced World of Warcraft," said Michael Fong, Blizzard Entertainment managing director, Greater China, "and we are committed to responding with continual updates to the game, including new dungeons for players to explore, additional player-vs.-player content, ongoing live events, and much more. Blizzard and The9 also remain dedicated to delivering unparalleled service to Chinese gamers with fully localized content and local, around-the-clock customer support."

The 1.5 million paying Chinese customers now join the two million players in North America, Europe, and Korea who are already paying to play World of Warcraft. With a worldwide customer population of more than 3.5 million, World of Warcraft is now by far the largest MMORPG in the world. Blizzard plans to continue expanding World of Warcraft with upcoming launches in Taiwan and other parts of Asia.