ECS touts the benefits of its Durathon technology

Posted on Wednesday, Dec 11 2013 @ 12:27 CET by Thomas De Maesschalck
ECS send out a press release to inform us about the benefits of their new Durathon standards for motherboards:

According to the research, a high percentage of short circuit, system instability, and burn out are caused by the physical environment, which can be referred to extremely hot or cold environment. ECS motherboards with Durathon Technology have been tested under extreme operating conditions with wide range temperature standard, which adopts 50% more stringent temperature test than normal industry standard, significantly improving the lifespan and reliability of the entire motherboard.

Tested For Extreme Operation Conditions
In order to make the computers operate flawlessly in every corner of the world, ECS motherboards with Durathon Technology have been designed to operate in extreme environments – even when handling supremely demanding computing tasks under the most extreme environmental conditions, such as hot desserts or cold artic environment – which are far above the industry standards for motherboards and give you unmatched durability and stability.

Motherboard Quality You Can Trust
ECS Durathon comprises four interlocking tests and enhancements together to protect PCs and defeat all the vital causes of hardware problems and system instability, which includes Triple Density PCB, Extreme Temperature Resistance, 1.5K Marathon Testing, and Superior Solid Capacitors. When it comes to quality and durability of your motherboard, ECS goes above and beyond industry standards to ensure that you have a motherboard that will last long and continue to outperform the competition. Trust only motherboards built with Durathon Technology. 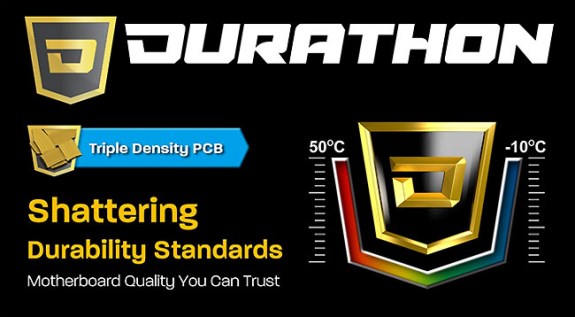