Posted on Monday, Dec 30 2013 @ 10:42 CET by Thomas De Maesschalck
TechPowerUp got its hands on some pictures of the PowerColor Radeon R9 290X PCS+. This upcoming custom-design card will be factory overclocked, the PCB looks largely the same as AMD's reference design but the cooling solution is beefed up to be able to better handle the heat output of the R9 290X. A Radeon R9 290 version of the card is also expected to be released, it will look identical. Pricing and availability is unknown.

Pictures reveal the card's PCB to be largely based on AMD's reference design, perhaps with variations on the choice of components. PowerColor has a knack of splurging on expensive, high-quality components on its PCBs (think International Rectifier and Coilworks VRM components, Samsung and SK Hynix memory chips, etc.), and we expect a similar treatment for the R9 290X PCS+. The two-slot cooling solution featured on this card is making its debut with it. It features a network of aluminium fin stacks to which heat is fed by copper heat pipes, and which are ventilated by a trio of 80 mm fans. 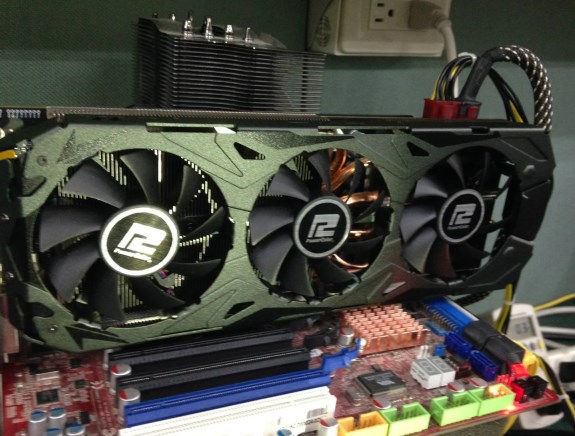