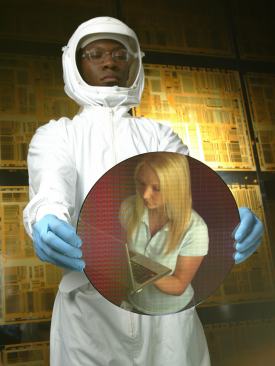 Intel Corporation today announced plans to build a new 300-mm wafer fabrication facility at its site in Chandler, Ariz. The new factory, designated Fab 32, will begin production of leading-edge microprocessors in the second half of 2007 on 45 nanometer process technology. Construction on the $3 billion project is set to begin immediately.

"This investment positions our manufacturing network for future growth to support our platform initiatives and will give us additional supply flexibility across a range of products," said Paul Otellini, Intel CEO. "For Intel, manufacturing is a key competitive advantage that serves as the underpinning for our business and allows us to provide customers with leading-edge products in high volume. The unmatched scope and scale of our investments in manufacturing help Intel maintain industry leadership and drive innovation."

When completed, Fab 32 will become Intel's sixth 300-mm wafer facility. The structure will be about 1 million square feet with 184,000 square feet of clean room space. The project will create up to 1000 new Intel jobs at the Arizona site over the next several years. During the construction phase, more than 3,000 skilled trades people will be hired to work on the project.

Intel currently operates four 300-mm fabs that provide the equivalent manufacturing capacity of about eight 200-mm factories. Those factories are located in Oregon, Ireland and New Mexico. The company also has an additional 300-mm fab currently under construction in Arizona (Fab 12) scheduled to begin operations later this year, and one expansion in Ireland (Fab 24-2) scheduled to begin operations in the first quarter of next year.

Manufacturing with 300-mm wafers (about 12 inches in diameter) dramatically increases the ability to produce semiconductors at a lower cost compared with more widely used 200-mm (eight-inch) wafers. The total silicon surface area of a 300-mm wafer is 225 percent, or more than twice that of a 200-mm wafer, and the number of printed die (individual computer chips) is increased to 240 percent. The bigger wafers lower the production cost per chip while diminishing overall use of resources. Three-hundred-mm wafer manufacturing will use 40 percent less energy and water per chip than a 200-mm wafer factory.

Separately, Intel said it will invest $105 million dollars to convert an existing inactive wafer fab in New Mexico to a component temporary test facility. The project will provide additional test capacity to the company's factory network for the next two years and will result in an additional 300 jobs at the New Mexico site during that period.