MSI, innovator in graphics cards, is pleased to announce the availability of the massive NVIDIA GeForce GTX TITAN Black utilizing an world’s most powerful GPU, the NVIDIA GK110, with 2880 CUDA Cores and 6GB/384bits GDDR5 memory. NVIDIA GPU Boost 2.0 technology allows the core clock to be automatically adjusted on the fly for optimal in-game performance. When used with the MSI Afterburner overclocking utility, the power limit and clock offset can be adjusted as well for better overclocking capability. A single card can also support NVIDIA 3D Vision Surround technology for up to four monitors to give gamers the best viewing experience. The MSI GeForce GTX TITAN Black is the best choice for the gamers.

Power Limit Control by Afterburner
The MSI GeForce GTX TITAN Black graphics card supports NVIDIA's GPU Boost 2.0 technology that allows the core clock to be adjusted on the fly for optimal performance. When used with MSI's exclusive Afterburner overclocking utility, gamers can control the power limit and clock offset for better overclocking capability. The card is also equipped with advanced fanspeed control based on GPU temperature. Afterburner supports the ideo/audio capturing function Predator and can even use smart phones to control the graphics card in desktop machines. When combined with the Kombustor burn-in testing function, it is an indispensable tool for everyone looking to get the most out of their graphics card. 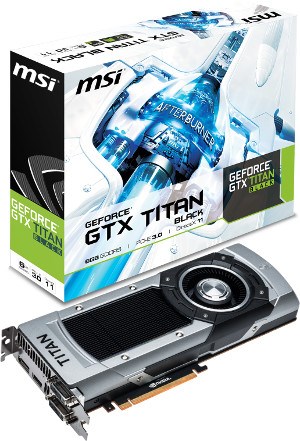