The all new MSI R9 290X LIGHTNING has been upgraded and improved to deliver the fastest single GPU graphics experience. With dozens of improvements across the board, the R9 290X LIGHTNING epitomizes the no-holds-barred overclocking attitude that drove the development of world’s fastest single GPU graphics card. The design reminisces of MSI’s greatest Lightning series graphics cards, like 2x 8-pin and 1x 6-pin power connectors on board Guaranteeing a minimum of 450W available for overclocking. The TriFrozr Thermal Design has been optimized to more efficiently dissipate heat from the GPU and on-board components to ensure class-leading results. The GDDR5 memory on the R9 290X LIGHTNING has been optimized in cooperation with AMD to deliver the best overclocking results whether cooled on by air or through extreme cooling like Liquid Nitrogen (LN2.)

MSI OC Series
The MSI R9 290X LIGHTNING is the first product to bear the new MSI OC Series logo which should be a clear indication of the enormous potential of the card in the hands of extreme overclockers. Featuring 12 GPU phases in an innovative solution to deliver the most stable voltages to the GPU when pushing extreme benchmarks. This is done through laying out the VRM components on both front and back side of the PCB. The optimized memory configuration promises new levels of memory overclocking on AMD’s R9 series. Extreme overclockers can use the special LN2 BIOS on the card to reach for overclocking records without special hardware modifications.

The best components
With the 3x OC kits you’re in complete control of the R9 290X LIGHTNING. V-Check points allow you to accurately measure GPU, Memory and PLL voltages. Triple Temp Monitor checks the real-time temperatures of the GPU, Memory and PLL while Triple Overvoltage allows you to overvolt those same components in order to achieve higher clock speeds. Equipped with Military Class 4 components, the R9 290X LIGHTNING is built to withstand the toughest conditions, like sub-zero freezing or the high temperatures that occur when exorbitant amounts of power are used to crush world records. Because only the best components can provide the continued support of multiple world-record attempts. 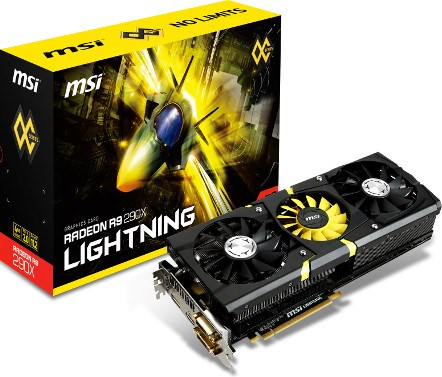