Neowin reports some of the first benchmarks of NVIDIA's new Tegra K1 SoC have popped up on AnTuTu and they're way above everything else. The dual-core 3GHz version is expected to ship in devices in the latter half of this year while the quad-core model is expected to arrive in the coming months.

The dual-core variation scored a giant 43617 on AnTuTu, and the quad-core variation scored a slightly higher 43851 points. For reference, the Snapdragon 805 scores 37780, the Snapdragon 801 scores 36469, and when looking towards Mediatek's MTK6592 eight-core SoC offering we see an even smaller AnTuTu score of 30,000 or so points depending on clock speed. 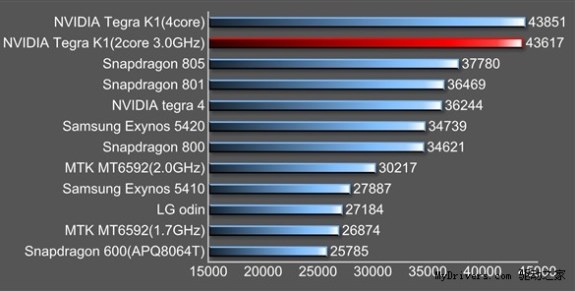