Posted on Tuesday, Apr 01 2014 @ 12:42 CEST by Thomas De Maesschalck
Samsung shows off its first 4K budget display, the $699.99 UD590. The TN-based LCD screen measures 28", it has a 3840x2160 resolution and can reproduce 1 billion colors. Other specifications include a 1ms gray-to-gray response time, 370 nits brightness and a 1000:1 contrast ratio. I/O includes dual-HDMI, DisplayPort and a headphone jack. Unfortunately, the UD590 is pretty minimalistic in terms of features, the display stand isn't adjustable (except tilting) and there's no VESA mounting bracket.

The UD590 monitor offers four times the resolution and pixels of Full HD displays (3840x2160). The 28- inch screen has eight million pixels to create the clearest and most detailed picture ever. Furthermore, the monitor includes a UHD upscale feature, which converts low resolution content to UHD level picture quality, resulting in a stunning, unmatched viewing experience.

The UD590 supports one billion colors, which is 64 times more colors than offered by conventional monitors, displaying images in lifelike quality. With one millisecond response time, users can enjoy smooth video playback of even the fastest moving action scenes.

Experience Best-in-Class Response Times
The Samsung UD590 monitor can handle all of the excitement of action movies, games and sports smoothly, thanks to a rapid one-millisecond response time. Viewers can enjoy even the fastest on-screen motion clearly without any motion blur, judder or ghosting. There's no lag during gaming and all the details appear in sharp UHD clarity, so it won't let players down at crucial moments.

Benefit from Advanced Multitasking with Premium Picture-in-Picture Feature
The UD590 features innovative multitasking features that meet the needs of today's busy consumers, who are often working across multiple windows and programs. Samsung's Picture-in-Picture 2.0 offers picture-in-picture windows for easy multitasking and the ability to adjust resolution, screen position and sound as desired. Through the feature, users can watch videos that maintain 100 percent of the source resolution. Whether it's Full HD, 720p or 480p, Picture-in-Picture 2.0 doesn't downscale content and maintains the original resolution, resulting in picture-in-picture visuals that are as clear and crisp as they'd be on their own.

The UD590 also allows users to connect two PCs at once and enjoy each at native resolution at the same time. This enables team members to effortlessly collaborate on the same screen, side by side. 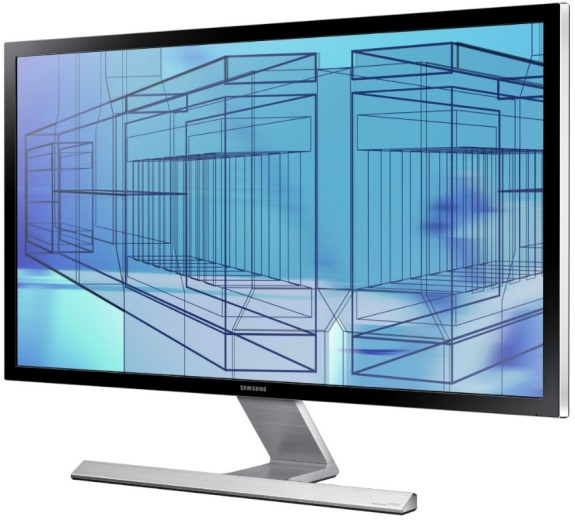