Intel is preparing Alpine Ridge, its next generation Thunderbolt controller. It's expected to be introduced in 2015, aroun the time when the chip giant launches its Skylake processors. The next-gen Thunderbolt will be wired to the processor instead of the motherboard chipset, it promises a bandwidth of up to 40Gbps and power delivery of up to 100W.

The Thunderbolt connector itself will receive an update, the new connector will be just 3mm thick. Unfortunately, this breaks backwards compatibility and will requires you to use adapters with older-generation Thunderbolt devices.

With PCIe 3.0 x4 or PCIe 3.0 x2 links at its disposal, the controller can push data at a staggering 40 Gbps. The link can also ferry DisplayPort, HDMI 2.0, and USB 3.0 data through its link layer. That bandwidth should enable you to plug in up to two Ultra HD displays, apart from your storage array. 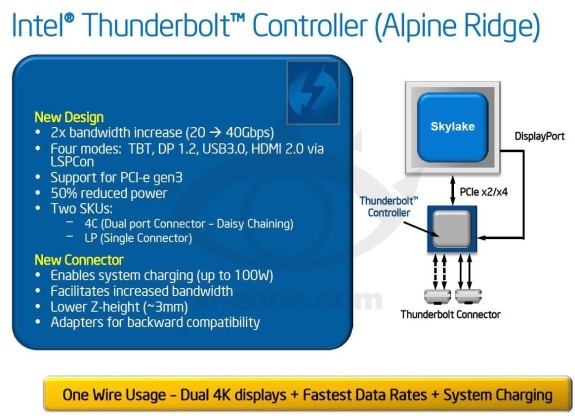