ASUS Hyper Express SSD is on the way

Posted on Monday, Apr 28 2014 @ 12:45 CEST by Thomas De Maesschalck
Legit Reviews reports ASUS is about to launch its first SSD, the Hyper Express. These storage solutions will let you enjoy SATA Express speeds right now by using two disks in RAID 0 mode. Legit Reviews tested a sample with two Kingston 120GB SATA 6Gbps mSATA drives and achieved read speeds of up to 704.2MB/s and write speeds of up to 746.7MB/s.

You have two 2.5? SATA Express external enclosures that house either two mSATA or m.2 SSDs and a larger 3.5? version that houses two SATA 2.5? notebook hard drives or SSDs. While the form factor differs, all are setup in a RAID 0 array with an internal RAID controller and then connected to the SATA Express interface that plugs directly into motherboards featuring SATA Express support. ASUS likely won’t be selling a complete drive (enclosure and SSDs) in the United States and instead just be offering the empty enclosure with the RAID controller setup and support CD. 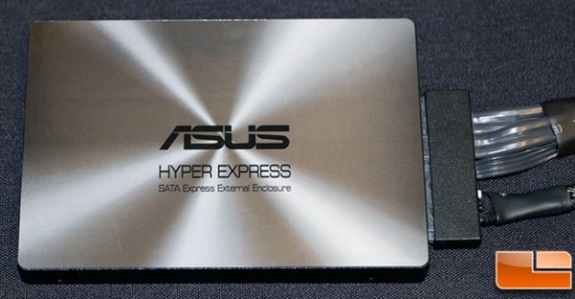