Samsung: 3D V-NAND to pave the way for terabyte-class SSDs

Samsung introduced the 850 Pro, a new line of SSDs that brings the company's 3D V-NAND memory to the consumer market. Available in capacities from 128GB to 1TB, these new disks feature 3D stacked memory made on a 40nm process. Thanks to being able to produce the memory on older process nodes, the memory should be easier to manufacture and Samsung claims you can also expect a higher lifecycle.

All capacities have an endurance rating of 150TB, which is much higher than the 80TB to 90TB typically offered by most consumer-grade SSDs. On top of this, another benefit of the 3D V-NAND flash memory is lower power consumption. Unfortunately, Samsung is not pricing the 850 Pro aggressively, the MSRPs are very high versus the street pricing of rivaling disks.

The 850 Pro SSDs feature 3D V-NAND flash memory with a capacity of 128Gbit per chip but Samsung claims they can increase this to 1Terabit per chip. The company foresees that this technology will enable them to create SSDs with a storage capacity of up to 16TB.

Samsung also teased its upcoming NVM Express (NVMe) SSD, this is a new specification for accessing SSDs through the PCIe bus. The company promises its upcoming SM951, which is targeted at ultrabooks, will deliver a 2-3x sequential read/write performance boost, a 10-30 percent random read/write improvements and a 80 percent drop in idle power consumption versus a SATA SSD. 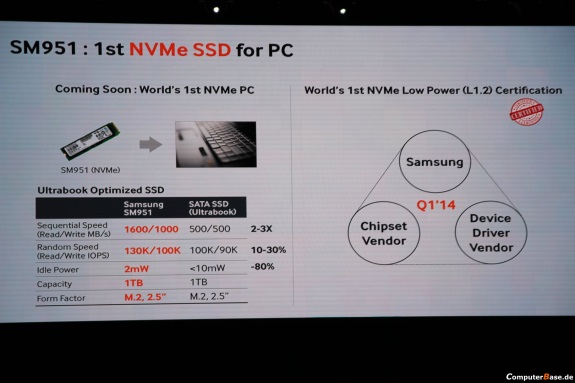