Microsoft laid out a plan to put pressure on Chromebooks this holiday season by offering a low-cost Windows 8.1 based alternative. In what seems like a redux of the netbook fad from a couple of years ago, the plan seems to be to focus on dirt-cheap pricing to prevent customers from adopting Chromebooks. Microsoft COO Kevin Turner said pricing of these new systems will start at $199, referring to HP's upcoming "Stream" notebook.

To combat this insurgence, Microsoft and its partners will put further pressure on Chromebooks this holiday season. Just in time for the holiday shopping rush, Microsoft COO Kevin Turner said that Hewlett-Packard will release a $199 “Stream” notebook that will offer the best of both worlds: 1) the low pricing of Chromebooks and 2) the vast software ecosystem of that only Windows can provide. In fact, Microsoft provided the following slide deck to point out its competitive advantages over Chromebooks. 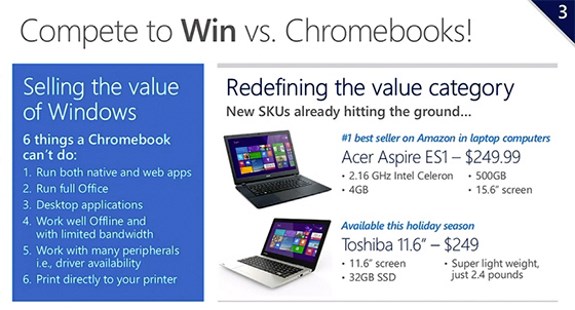