Posted on Friday, Jul 18 2014 @ 11:18 CEST by Thomas De Maesschalck
FUD Zilla came across a leaked shot of NVIDIA's Shield tablet at EVLeaks. The device seems a bit similar to the NVIDIA Tegra Note tablet, not a lot of details are available but the image reveals that it has front-placed stereo speakers and a front face camera. At present it's unknown when NVIDIA plans to announce the Shield tablet.

As we mentioned in our earlier report, Nvidia's Shield tablet should be based around a 7.9-inch 2048x1536 screen, Nvidia's 2.1GHz clocked Tegra K1 SoC with 2GB of RAM and 5GHz WiFi support, something that Nvidia needs for its Gamestream technology. 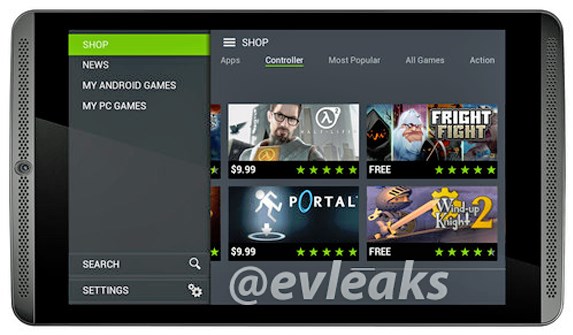