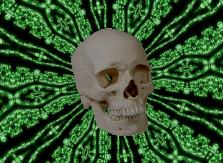 Our life is incredibly short, and many people at least think once in their life about being immortal. Paras Chopra is very interested in this matter and submitted an article to tell us his thoughts on immortality:

Immortality has always lured me. Immortality is not just living indefinitely but is to keep struggling to be alive. It means, you cannot die of natural factors but you can however die of you following beings e.g. someone switching off your simulation on a chip without you capable of doing anything coz you have not updated yourselves with the times and the environment you are living in.

But it should be noted that there is no thing such as 100% immortality. No one including the environment is fully immortal because then it would violate the law of life/energy. We will die ultimately when all the free (usable) energy of universe is used up and there is nothing to work upon.

I'm interested in achieving immortality because I want to see all that humans are capable of achieving. It would be sad for me to die before the arrival of teleportation technology, or before I taking an intergalactic tour from earth-mars-andromeda, or before achieving true Artificial intelligence or before we make ourselves habitable to silicon environments, And for the other millions of technologies and theories which are currently in distant future. I want to see them all. I know we (currently known as humans) will achieve all these one day but I also know that I might die before then. It is like going for a treasure hunt and knowing the adventure would definitely end before the goal is achieved. It is like playing a game with ‘game over' before ‘game end'.

There are many pathways for immortality. We haven't even achieved 0.000001% of our total potential. There is long way to go and I want to see it all. Currently, there are so many methods which describe immortality and infinite more to arrive. Some of them are: Before we delve into the theory, I would like to discuss the term environment. ‘Environment' here is discussed in the most abstract sense. The term takes meaning in context to the meaning of the sentence where it is used. It can be anything where it fits best. And yes, it is subjective here. This is because subjectivity gives more options for evolution than objectivity. More subjects more exploration.

The terms ‘organism' and ‘energy' is also used in an abstract sense. They can mean anything what we want it to be. It should be carefully observed that in this way the terms ‘environment', ‘organism' and ‘energy' are mutually interchangeable. We can name any term anything as long as it makes sense. In this sense, an organism or the energy can be earth, mars, carbon, silicon, bits and bytes, differential equations, time, EM waves, etc. Therefore,

All these three exist for the benefit of each other or in other words, they depend on each other for its existence. They exist mutually.

Now we take a look at the organism. But please note that you can freely replace the term ‘organism' with ‘environment' or ‘energy' in any of the text below or above. For example, if an organism lives or it has a life by exchanging energy with stale or nonliving organism, we can very well say that the environment lives but not the organism. Or that energy lives on organism via environment as a medium.

Why do we live? Why do we come into existence? Basically, it is the environment which drives the life. As with every system, the environment wants to decrease its free energy. That is why it gives birth to life (it is a part of evolution). When the life comes into being, then the search for ultimate energy harvester starts. This is called evolution. As the complexity in life emerges, the organisms become better energy harvesters. They take energy from the environment, use it thus converting the free energy into unusable energy which is what environment wants. Environment makes us die because it does not want to halt the process of evolution. Evolution is very much necessary for environment because it is the process by which new and better energy harvesters comes into being. If an organism lives forever he possibly will trap the resources for himself which might lead to better organisms or which other organisms can use better. Thus it halts one path for evolution to occur and environment certainly does not want it. To become immortal, an organism needs to do one of the following:

Paras Chopra was born in Patiala, Punjab, India on 3rd June 1987. His interests lie in subjects ranging from Nanotechnology to Biotechnology to Artificial Intelligence. His goal in life is to achieve immortality. Visit him at: www.paraschopra.com