War of the Disks: A Close-in Analysis of Hard Disk Drive vs. Solid State Disk 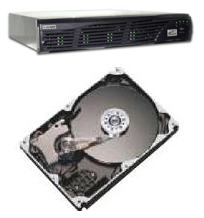 Much has been written about solid state disks (SSDs) becoming the next big thing in the IT industry(1). But as to whether or not we have enough knowledge of how it will revolutionize the industry is a different question. How much do we really know about SSDs? If we are to ask people on the streets, it wouldn't come as a surprise that they dont know much of what an SSD is. Even if they do know, most probably it would be limited to a USB pen drive, a CompactFlash or a Secure Digital card, which are more on the consumer side of the storage industry.

Technically speaking, they are not wrong. Most web definitions describe an SSD as a high-performance plug-and-play storage device that contains no moving parts. Therefore, given that most of the aforementioned mobile disk storage devices contain no movable parts, they can certainly be categorized as SSDs.

But then again, there's more to SSDs than being a non-volatile device. The purpose of this article is to give readers a clearer picture of what an SSD is, its usage as well as its difference when pitted against the predominant data storage device at present - the hard disk drive (HDD). More than its non-volatility, this article will reveal how much potential SSDs have in optimizing the performance of the computing system.

Here are several ways the SSD is defined:
"A solid state disk (SSD) is electrically, mechanically and software compatible with a conventional (magnetic) hard disk or winchester. The difference is that the storage medium is not magnetic (like a hard disk) or optical (like a CD) but solid state semiconductor such as battery backed RAM, EPROM or other electrically erasable RAMlike chip. This provides faster access time than a disk, because the data can be randomly accessed and does not rely on a read/write interface head synchronising with a rotating disk. The SSD also provides greater physical resilience to physical vibration, shock and extreme temperature fluctuations. The only downside is a higher cost per megabyte of storage."(2)

"Abbreviated SSD, a solid state disk is a high-performance plug-and-play storage device that contains no moving parts. SSD components include either DRAM or flash memory boards, a memory bus board, a CPU, and a battery card. Because they contain their own CPUs to manage data storage, they are a lot faster (18MBps for SCSI-II and 44 MBps for UltraWide SCSI interfaces) than conventional rotating hard disks ; therefore, they produce highest possible I/O rates. SSDs are most effective for server applications and server systems, where I/O response time is crucial. Data stored on SSDs should include anything that creates bottlenecks, such as databases, swap files, library and index files, and authorization and login information."(3)

For the rest of the article, we will compare the HDDs and Flash-based SSDs. The latter are the most popular type of SSDs employed by the military, aerospace, industrial and embedded systems industries.

Mortality Rate
Hard disk failure is a common occurrence in this age of desktops and notebooks. A lot of horror stories have been told, passed around and even published about how valuable data was lost and the agony of trying to retrieve or at least save a portion of the crashed hard drive. It is during this time that people wonder, why do hard disks fail?

The reason is simple - wear and tear. Just like any good old machine with mechanical components, HDDs tend to deteriorate over time. HDDs consist of rotating, magnetically coated disks, known as platters, that are used to store data. This rotating motion of the mechanical arms results in much wear and tear after long periods of use. The operational lifespan of a computer HDD is over three years.(4)

A Flash-based SSD is different. Although the most common Flash chips have around 300,000 write cycles, the best Flash chips are rated at 1,000,000 write cycles per block. On top of that, Flash SSD manufacturers employ different ways to increase the longevity of the drives. In some cases, they use a "balancing" algorithm to monitor the number of times each disk block has been written, which greatly extends the operational lifespan of the drive. Furthermore, these manufacturers also designed special "wear-leveling" algorithms where once a certain percentage threshold for a given block is reached, the SSD will swap the data in that block with the data in another block that has exhibited a "read-only-like" characteristic in the background. This reduces performance lag and avoids further wearing off of the blocks and thrashing of the disk. Even with usage patterns of writing/reading gigabytes per day, a Flash-based SSD should last several years, depending on its capacity. Add to that the inclusion of a DRAM cache in the disk architecture that further enhances its operational capabilities as well as lifespan.

Speeding Up
With the very fast paced lifestyle these days, most businesses are time-bound and cannot afford a slowing down in their transactions. This makes speed of HDDs a crucial point in technological purchases. The typical access time for a Flash based SSD is about 3.5 - 10 microseconds, whereas that of a rotating disk is around 5 - 10 milliseconds. That makes a Flash-based SSD approximately 100 times faster than a rotating disk.

This however raises another point - what's the benefit of a high-speed SSD when the entire system cannot support it? The evolution of CPUs in terms of performance has far surpassed the development of the data storage system. The HDD is actually limiting the potential of a computer system when they are not able to keep up with the performance of the other components, particularly the CPU. If an HDD is replaced by a high-speed SSD, the performance would significantly improve. The resulting system would be a high-powered set-up that can go beyond the demands of high-speed business or military environments.

Size Matters
To be a true plug-in replacement for HDDs, Flash-based SSDs are manufactured in standard 2.5" and 3.5" form factors. 2.5" SSDs are normally used in laptops or notebooks while the 3.5" form factors are used in desktops, or in JBOD or other SAN/NAS/DAS configurations. They can often be used to replace traditional disks in storage arrays or in a server's internal disk bays. Flash-based SSDs certainly fit the storage needs of most embedded systems that require much smaller form factors.

Reliability
In terms of reliability, conventional HDDs pale when compared to SSDs. The absence of mechanical arms and spinning platters is the reason behind its reliability. In demanding environments, SSDs provide the type of ruggedness required for mobile applications. Unlike the HDD, SSD's can withstand extreme shock and vibration with data integrity and without any danger of data loss. This feature is very important in industrial applications where exposure to highly combustible materials and electromagnetic radiation are typical. Their ability to deliver unnerving performance in extreme conditions also makes SSD play a vital role in military operations, be it in defense, aerospace or aviation applications. Military applications require, in most cases, an operating temperature range of -60°C to +95°C. Shock, vibration, and temperature ratings of HDDs cannot comply with military standards, only SSDs can.

Power Play
In addition to speed, reliability and mortality rate being positively affected by the SSD's non-volatility, they also consume much less power than traditional HDDs. No additional power is required to activate the platters or the mechanical arms present in most HDDs. Its power consumption is practically only a fraction of a hard disk drive.

Heat Dissipation
Along with the lower power consumption, there is also much lesser heat dissipation for systems using Flash-based SSDs as their data storage solution. This is due to the absence of heat generated from the rotating/movable media. This certainly proves to be the one of the main advantages of Flash-based SSDs relative to that of a traditional HDD. With less heat dissipation, it serves as the ideal data storage solution for mobile systems such as PDAs, notebooks, etc. Users can do away with large cooling fans, internal power supply and batteries for large storage arrays in storage area networks.

Cost Considerations
Of course, everything comes with a price. Based on a cost-benefit logic, it is but expected that something with very impressive features be priced higher than something that offers fewer benefits. SSDs as being a bit more pricey than the traditional hard disk drive may be one of the compelling reasons why up to now it hasn't gained as much popularity as it should be getting with all its brilliant functions.

While the use of SSDs today have mostly been limited to industrial and military implications, enterprise are now looking closely at SSDs for implementing tiered storage and optimizing their storage architectures.

To quote from the Solid State Disks Buyers Guide published by storagesearch.com, "In fact the SSD is replacing servers and software licenses. SSDs can be used either to speed up the response time of existing applications as an alternative to buying more servers, or to reduce the number of servers and software licenses deployed. The economics can be compellingly in favor of an SSD deployment". The industry is also expecting more breakthroughs as higher memory capacities and faster performance are now being produced for a wider array of choices fit for any mission-critical application.

Analysts foresee a rapidly closing gap between HDD and flash SSD pricing (see related article "Are Flash Solid-State Disks Ready for the Enterprise"(5) ). This vision is also bolstered by a recent announcement(6) of electronic giant Samsung that they will invest heavily in improving their flash and DRAM production lines and flash SSD equipped laptops. Only time will tell if we will witness widespread commercial adoption of SSDs.

About the Author
Joanne De Peralta is Marketing Communications Specialist for BiTMICRO Networks. You may reach her at jdeperalta@bitmicro.com