Posted on Monday, Nov 03 2014 @ 13:36 CET by Thomas De Maesschalck
TPU published a photo of the MSI X99S Gaming 9 ACK, a new motherboard expected to be launched later this month. The feature set of the motherboard is largely identical to the X99S Gaming 9 AC, with the exception being that it includes Killer DoubleShot Pro for lower latency:

The "K" in the "ACK" stands for "Killer," denoting the board's Killer DoubleShot Pro feature, which lets you team up your wired gigabit Ethernet, with WLAN, to produce a staggering 1.866 Gbps of bandwidth, at low latency. In other words, the board features a Qualcomm Killer WLAN controller, instead of the Intel-made one on the standard X99S Gaming 9 AC. The wired gigabit Ethernet interface is care of a Killer E2205 controller, whereas the WLAN interface is handled by a Killer 1525 chip, which supports 802.11 ac, in addition to Bluetooth 4.0. The rest of this board's feature-set is identical to that of the X99S Gaming 9 AC. 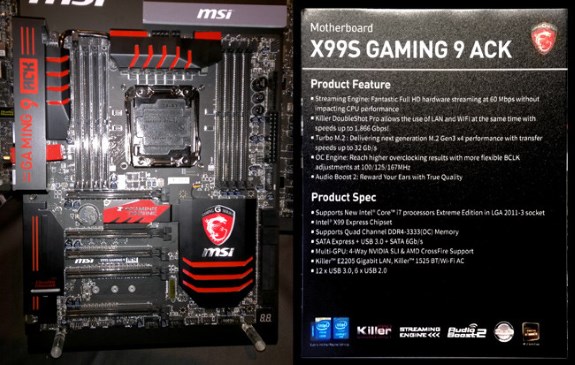