Posted on Monday, Nov 17 2014 @ 16:31 CET by Thomas De Maesschalck
MSI introdues the GeForce GTX 970 GAMING 4G Golden Edition. This card features the Twin Frozr V cooler and offers a 1165MHz core, 1317MHz Boost and 4GB GDDR5 memory clocked at 7010MHz. The card has a golden dragon on its backplate but the color scheme of the front's fan shroud looks more copperish than the yellow tone you expect from gold.

Twin Frozr V Thermal Design
The new MSI twin Frozr V Thermal Design is the pinnacle of graphics card air cooling. With a smaller than 2-slot design the new Twin Frozr V is able to surpass previous generation's by a large margin. The new 10cm Torx fans ensure huge amounts of silent airflow and visually match the bold new look of the Twin Frozr V. The heatsink itself is re-organized through the SuperSU design which increases heat-pipe efficiency, especially when combined with Airflow Control Technology. Hybrid Frozr is a throwback to 2008 when MSI was the first to market high-end, zero noise graphics cards thanks to fans that stop spinning in low-temperature situations. Additionally, you will find Independent Fan Control on certain models which allows fans to spin independently of one-another based on component temperature below the fans.

MSI GAMING
With the GTX 970 GAMING 4G GOLDEN EDITION, the next-generation of MSI GAMING graphics cards MSI is leveling-up the PC gaming experience. The MSI Gaming App allows gamers to quickly switch between OC, Gaming and Silent modes depending on their needs. Now featuring the EyeRest tab, which offers quick access to specific monitor color profiles for games, movies and a special EyeRest mode which reduces blue light. Reduction in blue light emission helps tune your body to the night-time so it's easier to rest after long gaming sessions. 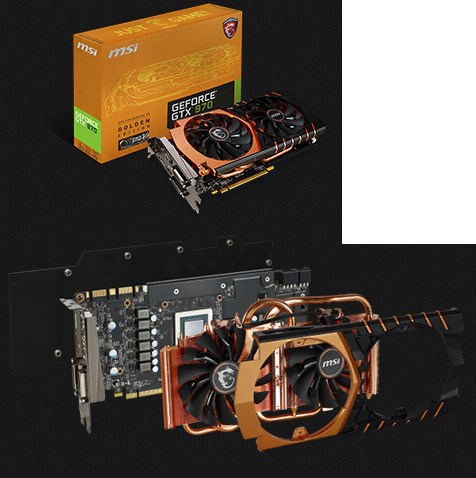