Intel also talked about future server platforms that will support new technologies like FB-DIMM memory during 2005-2006.

In the near future the company plans multi-core, enhanced virtualization, enhanced I/O and memory, enhanced RAS, enhanced manageability and the common platform architecture. 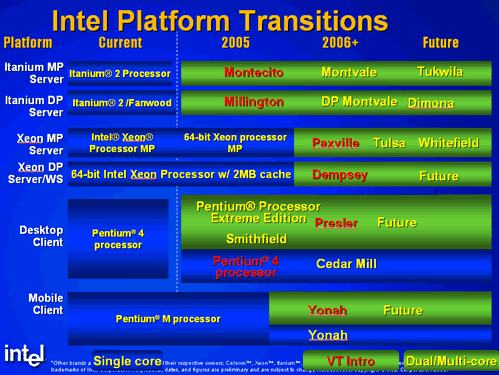 Intel's roadmap splits the Xeon platform into three segments:
>br> The Performance Optimized platform which will offer the Irwindale (110W) in the second half of 2005, the dual-core Dempsey in 1H 2006 and the dual-core Woodcrest in 2H 2006. This platform is optimized for best performance for 2U/Pedestal.

Finally there's also the Ultra-Dense platform for applications where power is the number one concern. This platform will feature the 55W LV Irwindale in the second half of this year and the dual-core 31W Sossaman throughout 2006.

More details and roadmap pictures at The Inquirer