NVIDIA shows off its new mobile flagship; the Tegra X1. This SoC is based on the Maxwell architecture and features 256 CUDA cores, double as much as the Tegra K1. NVIDIA says the Tegra X1 offers a teraflop of computing power and showed off a stunning Epic Games’ “Elemental” demo at the company's CES event.

Tegra X1 is built on the same NVIDIA Maxwell™ GPU architecture rolled out only months ago for the world's top-performing gaming graphics card, the GeForce® GTX 980. The 256-core Tegra X1 provides twice the performance of its predecessor, the Tegra K1, which is based on the previous-generation Kepler™ architecture and debuted at last year's Consumer Electronics Show.

Tegra processors are built for embedded products, mobile devices, autonomous machines and automotive applications. Tegra X1 will begin appearing in the first half of the year.

It will be featured in the newly announced NVIDIA DRIVE™ car computers. DRIVE PX is an auto-pilot computing platform that can process video from up to 12 onboard cameras to run capabilities providing Surround-Vision, for a seamless 360-degree view around the car, and Auto-Valet, for true self-parking. DRIVE CX is a complete cockpit platform designed to power the advanced graphics required across the increasing number of screens used for digital clusters, infotainment, head-up displays, virtual mirrors and rear-seat entertainment.

"We see a future of autonomous cars, robots and drones that see and learn, with seeming intelligence that is hard to imagine," said Jen-Hsun Huang, CEO and co-founder, NVIDIA. "They will make possible safer driving, more secure cities and great conveniences for all of us.

"To achieve this dream, enormous advances in visual and parallel computing are required. The Tegra X1 mobile super chip, with its one teraflops of processing power, is a giant step into this revolution."

Faster Than Previous Top Supercomputer
Indeed, Tegra X1 has more horsepower than the fastest supercomputer of 15 years ago, ASCI Red, which was the world's first teraflops system. Operated for a decade by the U.S. Department of Energy's Sandia National Laboratory, ASCI Red occupied 1,600 square feet and consumed 500,000 watts of power -- with another 500,000 watts needed to cool the room it occupied. By comparison, Tegra X1 is the size of a thumbnail and draws under 10 watts of power.

As serious gamers know from using the NVIDIA® GeForce® GTX 980 GPU, the Maxwell architecture solves some of the most complex lighting and graphics challenges in visual computing. Its innovations include Voxel Global Illumination, or VXGI, for real-time dynamic global illumination and Multi-Frame Anti-Aliasing, or MFAA, for incredibly lifelike graphics in the most demanding games and apps. 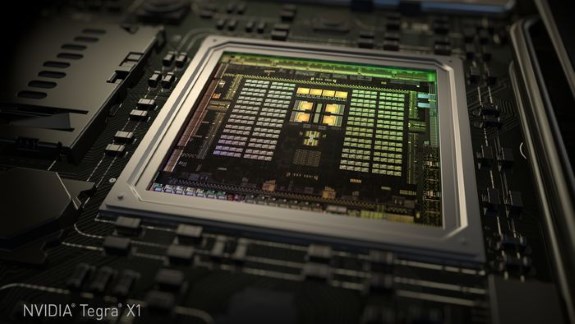