Posted on Tuesday, January 06 2015 @ 14:33 CET by Thomas De Maesschalck
Patriot announces its second-generation Supersonic Magnum and Rage USB Flash Drives, these new models promise read speeds of up to 400MB/s and write speeds of up to 300MB/s! They'll start shipping in February, the Magnum 2 will be available in 256GB and 512GB capacities while the Rage 2 will ship in 128GB and 256GB models.

Supersonic Magnum 2, 3.0 USB Flash Drive
Living up to its name sake, the Patriot Supersonic Magnum 2 will be available in extreme capacities of 256GB and 512GB making the frustration of not having enough room to store data virtually non-existent. With impressive maximum read and write speeds reaching 400MB/s and 300MB/s it’s the fastest high capacity/high performance USB flash drive on the market.

Designed with a sturdy matte black, industrial grade metal housing that enables shock resistance up to 15Gs to protect stored data and laser etched, the Magnum 2 doesn’t compromise appearance and class for safety. A detachable cap covers the USB connector to prevent damage and debris from entering the port.

Supersonic Rage 2, 3.0 USB Flash Drive
The Supersonic Rage 2 is Patriot’s highest performing, ultra-portable and high capacity USB 3.0. Its rugged, rubberized casing is designed to withstand the wear and tear of everyday use and the all-in-one slide to connect feature protects the port from damage it might encounter while traveling at the bottom of a pocket or bag.

With lightning fast maximum read and write speeds of up to 400MB/s and 300MB/s the Supersonic Rage 2 is Patriot’s fastest high performance retractable USB. Available in capacities of 128GB and 256GB, the Rage 2 is the perfect USB for performance enthusiasts and content creators. It’s compact form factor and impressive speeds make it the obvious choice for quick access to large projects and presentations during important meetings.

“Patriot has revamped its Supersonic USB line with two great new additions, both with exceedingly fast speeds,” said Meng Jay Choo, Product Manager at Patriot. “There are no comparable USB drives on the market, at the moment, and we hope to continue to deliver impressive performance speeds to our customers as technology advances.” 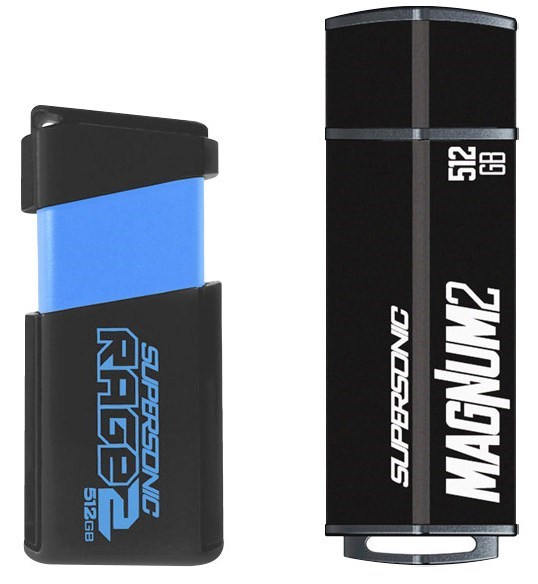