Posted on Thursday, January 08 2015 @ 17:00 CET by Thomas De Maesschalck
One of the cool things on display at Cooler Master's hotel room at CES 2015 is the Kinetic Cooling Engine, a new heatsink concept that was originally designed by the Sandia National Laboratories and is now licensed by CoolChip Technologies.

This intriguing cooling concept removes the need for a conventional fan by rotating a finned heatsink on top of a thin cushion of air. It's primarily intended for mobile and small-form factor systems, the Kinetic Cooling Engine promises about 50 percent better cooling than traditional solutions at half the size and with significantly lower noise levels. The Tech Report saw the cooler in action and reports the new cooling solution was "silent" compared to the "noisy whine" of laptop-style blower.

Cooler Master had a desktop version on display which surrounds the spinning heatsink with a ringed radiator that's connected to the base via copper heatpipes.

One of Cooler Master's desktop prototypes surrounds the spinning heatsink with a ringed radiator that hooks into the base via heatpipes. Cooling duties are split between the radiator and heatsink, and because the latter generates its own airflow, there's no need for a separate fan. Despite the extra radiator, the cooler remains relatively compact—and much shorter than typical air towers.

Cooler Master might want to add some sort of grill to prevent errant fingers from being shredded by the heatsink, though. Getting nicked by plastic fan blades doesn't feel nice, and I imagine those metal fins do a lot more damage when spinning at high speed. 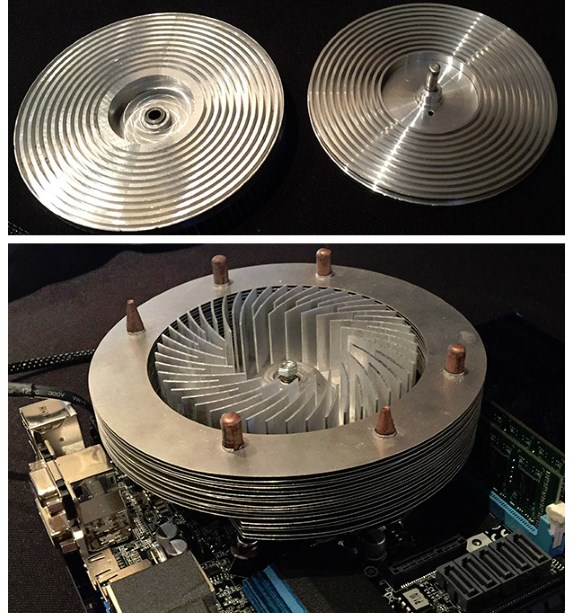