Samsung announced it initiated mass production of world's first GDDR5 memory chips with a capacity of 8Gb. The chips are made on a 20nm process and feature a bandwidth of 8Gbps.

Samsung Electronics, the world leader in advanced memory technology, announced that it has begun mass-producing the industry’s first 8 gigabit (Gb) GDDR5* DRAM based on the company’s leading-edge 20-nanometer (nm) process technology. GDDR5 is the most widely used discrete graphics memory in the world.

Designed for use in graphics cards for PCs and supercomputing applications, and on-board graphics memory for game consoles and notebook PCs, discrete graphics DRAM provides an extensive amount of bandwidth to process large high quality graphically-oriented data streams. With the rising popularity of 3-D games and UHD video content soon to be widespread, the need for high-performance, high-bandwidth graphics memory has begun to rapidly increase.

“We expect that our 8Gb GDDR5 will provide original equipment manufacturers (OEMs) with the best graphics memory solution available for game consoles as well as general use notebook PCs,” said Joo Sun Choi, Executive Vice president of Memory Sales and Marketing at Samsung Electronics. “By expanding our production of 20nm-based DRAM products including the new GDDR5, we will meet increasing global customer demand and take the lead in accelerating the growth of the premium memory market.”

Samsung’s new GDDR5 DRAM offers outstanding bandwidth. Combining only eight of the new 8Gb chips will achieve the same density as the 8 gigabytes (GB) needed in the latest game consoles.

The memory operates with an I/O data rate of 8 gigabits per second (Gbps) per pin, which is more than four times faster than the DDR3 DRAM widely used in notebook PCs today, and each chip can process data at 32-bit I/O rate. Two GB of graphics memory can be created with just two of the new chips, which together can process up to 64GB of graphical images per second. That equates to processing approximately12 full-HD DVDs (5GB equivalent) in a second.

With this new 20nm 8Gb GDDR5, Samsung has completed its line-up of 8Gb DRAM solutions based on its leading-edge 20nm process technology, covering the server, PC, mobile and graphics memory markets. The world’s largest memory manufacturer will keep expanding the production volumes of its 20nm DRAM products at a variety of densities including 4Gb, 6Gb, 8Gb and higher densities to solidify its leading position in high-end IT market segments as well as more value-driven markets. 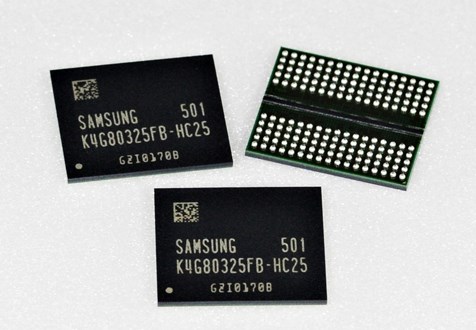